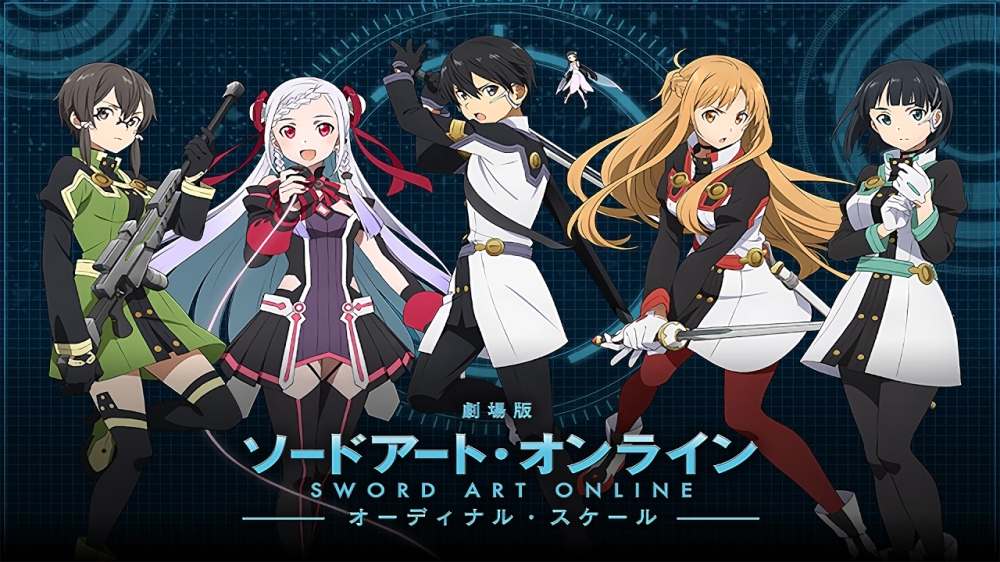 I went into Ordinal Scale as optimistic as I can be about Sword Art Online and for a few minutes I felt it was taking steps towards being a decently good movie, until it suddenly came crashing down at about the 10 minute mark. The beginning of the movie puts a lot of effort into reminding you of the show’s best arc, namely the death game that took place in Aincrad. We get a narrated summary of the events, it shows a massive memorial to the fallen, and a news item is shown revealing that a book has come out detailing the tragedy that occurred in the anime’s first story arc.

It gives the impression that it really was an event that tore people up and though we know most of the main cast went right back to VR video games the moment they got out of the death game, this opening makes it feel like the events that took place left a mark on them. Which is why it was absolutely baffling that the Augmented Reality game this story centers around is first introduced to us through a special event where bosses from Aincrad are brought back to serve as a promotion, AND EVERYBODY IS OKAY WITH THIS.

We are led to believe that this is a world where 4000 people died cruel deaths at the hands of a deranged game developer and those that survived the ordeal are now hyped up that they get to relive those moments. Nobody gives a shit that just years ago these same monsters murdered their friends and guild mates, everybody is just okay that this is now being used as a marketing ploy for some other video game.

I know it’s popular to rag on Sword Art Online, but I am not so pretentious as to deny I enjoyed the show’s first season, and particularly the Aincrad arc. It was a story that had consequences, lord knows it’s the only arc in which Kirito had actual growth, and character deaths were often brutal and tragic. To have this movie come around and then treat the events of this arc so lightly was plain insulting to me, to the fans of the series, and to the anime itself.

#2 This Edgy McEdgelord of a villain

Sword Art has been home to some really terrible villains in the past and while this over-dramatic idiot doesn’t quite reach the height of stupidity that was season 2’s DEATH GUN, he nevertheless was a boring misanthrope of a bad guy. He is the #2 player of the AR video game and the first few times we see him he is just standing around being threatening and mysterious before steamrolling a boss fight or doing some other crazy stuff.

The movie takes forever to tell us his motivations, which end up being really shortsighted and honestly kind of dumb, though in his defense it’s Reki Kawahara’s nonsense science that forces him down this path. I won’t outright spoil the movie’s plot twists, but it really isn’t interesting enough to warrant making him the main villain of a movie based on one of anime’s biggest franchises of the moment. Maybe if we had an interesting personality or a character arc it would be forgivable, but this wasn’t meant to be and towards the end of the movie he just ceases to be a threat the moment Kirito decides to get serious. On that note…

Kirito being absurdly overpowered has been a major bug bear for people throughout the entire anime, which takes on a whole new form in Ordinal Scale. As I mentioned earlier, rather than a full dive MMORPG, this time around we are dealing with an augmented reality game, meaning people are just wandering the streets swinging their arms around like idiots while their fancy glasses make it look like they are fighting some huge monsters. The twist is that Kirito doesn’t like AR and isn’t very good at it, claiming it feels clunky and that he prefers full dive controls.

Even though he avoids partaking in the special event with the Aincrad bosses because of this, instead of using the more reasonable argument that it’s absolutely distasteful to be fighting these monsters again, when Asuna is hurt because of the villain’s actions he leaps into the fray anyway. And even though he sucks with AR controls and he is entirely out of shape, Kirito ends up dominating the rankings in a matter of hours, whereupon he resumes his favorite hobby of solo’ing raid bosses meant for dozens of players. Wouldn’t want anybody to think Kirito might have flaws or wasn’t the best at a video game for once. Wouldn’t want a hero that has to work and practice to reach the top, people that have to put in effort to achieve things aren’t cool at all.

In all seriousness: Kirito is just absolutely boring in this movie.

Going into this movie I did basically no research and was therefore curious if this was actually based on Reki Kawahara’s story or if some other person got to write an original screenplay within his world. A question that was answered not long into the movie, as the complete absence of logic in both the game-design and the technology that supports it is a trademark Kawahara bit of writing.

Ordinal Scale is a video game in which everybody has a ranking and by taking part in events you earn points and move up in that ranking, whereas losing and being knocked out deducts points. It’s essentially Pokémon Go the fantasy RPG, as people head to places where monsters appear and cooperate to fight them, but this makes no sense whatsoever. These monsters are clearly knocking people around and having a physical impact on them, which they should not be capable of if they were just virtual images being projected into the real world. 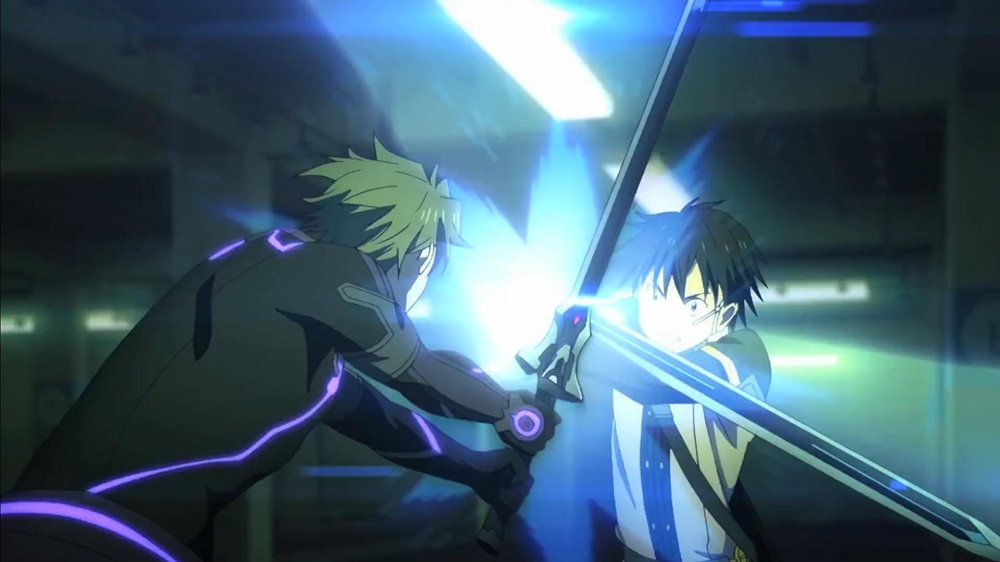 Having characters move at lightning speeds and flipping around while slashing with a sword made sense in the virtual reality games, but now that we are supposedly seeing real nerds trying it out in real life it is no longer believable, nor can I buy into the premise that any government would accept having a bunch of aggressive gamers running around the city flailing their arms at the air. I believe the flashy fight scenes were such a major part of the anime series that they couldn’t possibly do a movie without including them, even as they left behind the world of virtual reality, which is really just a case of bad planning and the writers being inconsiderate.

The entirety of Sword Art Online has been a string of different alternate reality games proving they aren’t safe to play and should probably be heavily regulated or outright banned. Even if we assume they are permitted to exist despite the growing number of casualties, Ordinal Scale would in no way be a safe game to play. The game is clearly shown to have functioning PvP mechanics and permit people to hurt one another with actual, full contact fights. Even if it didn’t, how can you possibly get away with having players “fight” in places where non-players are likely to be walking around.

On a side-note, I can only imagine the people playing this AR game look like absolute losers in the eyes of anybody passing by.

#5 The quality is kind of low for a movie

Sword Art Online always managed to draw people in with its fantastic-looking fight scenes, iconic character designs, and gaming-themed imagery, which certainly carries over into the movie. If you go into it with a “turn your brain off” mentality you’ll find that the movie is at least as enjoyable as the anime series, but my issue here is that it really doesn’t surpass the anime in any way.

The increased budget and greater focus a movie typically enjoys is an opportunity to improve the quality of the animation, which just isn’t the case here. The movie looks generally on par with the show, yet it falls short in terms of creativity and directing. None of the areas look as imaginative as some of the better moments of the anime series and especially the boss monsters, at least those that aren’t just flat-out recycled, look really phoned, with nothing as cool as the Gleam Eyes or Skull Reaper making an appearance. The fight scenes are also kind of meh compared to some of the better battles from the show, certainly a whole lot less memorable. Even the final encounter between wonder boy Kirito and Edgelord Eiji is over in a few seconds and doesn’t look anywhere near as interesting as, say, Yuuki’s fight with Asuna in the Mother Rosario arc.