#1 Kendo turns out to be pretty rad

Growing up with a father who is an absolute soccer fanatic, I never understood the appeal of watching other people sport. I do enjoy exercising and make an effort to stay in shape, but as a kid I hated having to watch soccer games night after night (as opposed to playing Nintendo on our one and only TV), and the many attempts of my parents to get me into any kind of sports myself all failed miserably. Even as an adult with complete control of what I watch on TV, I still avoid sports and sport-themed anime like a plague, until Bamboo Blade tempted me out of my comfort zone. Turns out that kendo is actually really cool… I am ashamed to admit I originally thought kendo was more of a wrestling-type sport, so when I noticed it was more like fencing with wooden swords that was a pleasant surprise in and of itself. Director Hisashi Saitou also managed to make it look exciting and fast-paced, as opponents clash with their swords and strike at the weak spots in their foe’s defenses, accompanied by shouts and a bit of animated exaggeration to make it all come together. You also don’t have to sit through any lengthy rundowns of all the rules, as they manage to ease you into those quickly and without too much confusion.

After seeing it animated here I actually became curious and looked up a few major kendo matches to see how real-life pros do it. And hey, if a lazybones like me with no love for sports at all can enjoy it, then I can only imagine fans will have an even better time.

I bought the Funimation S.A.V.E. collection of this show sight unseen, simply because I had seen some of the character art online and was intrigued by it. Kirino especially had my attention, as her blonde hair in combination with the very detailed hairstyle they gave her was a cool design, and I got the impression she’d be a fun, mischievous character going by her expression. She lends herself well to comedic moments, but even in serious scenes like the one below her design stands out compared to girls in other anime. The rest of the cast is honestly not far behind, and most of the girls get attractive designs with a lot of detail worked into them. It looks and feels different compared to other shows, and while I did find that Tamaki and Yuuji were a bit too simplistic, on average character artist Igarashi Aguri whipped up some of his finest work for Bamboo Blade. Even minor side-characters end up with the same treatment, unless they really are some throwaway needed for a scene or two.

Of course, a good design isn’t worth much when the characters attached to them aren’t interesting people. This, too, Bamboo Blade has covered, as especially the core of the kendo team, the five girls that make up its tournament roster, are well written and plenty entertaining. Like the designs themselves, the characters display a lot of eccentricities that fans of anime are likely to enjoy, while still being recognizable enough that they feel relatable. Tamaki is the main protagonist of the story, a soft-spoken and introverted girl who is a prodigy at kendo, but sees it as more of an obligation. While she is hesitant to join the club at first, she ends up realizing the club is a great way for her to make friends and find enjoyment in the sport through them. She is also obsessed with super heroes and I always find it interesting when anime characters are themselves fans of anime, especially if actual anime make cameo appearances or they put effort into making the in-universe fiction look great.

The other four members I won’t go into too much detail on, but I found all of them fun to watch and I was interested in their personal struggles and objectives. Especially Miyako I had a lot of fun with, as she is a violent character with a brutal fighting style, who can still often scare the people around her despite her attempts of leaving her punk lifestyle from middle school behind. What makes her interesting is that her boyfriend is really upstanding and she is so smitten with him that he drives her to be a better person herself. His presence, or even just thinking about him, immediately saps away her anger, which is honestly adorable and makes them a great couple. She also gets a lot of screen time and development, possibly even more so than Tamaki and Kirino.

Bamboo Blade is excellent at balancing the long-term story with smaller side-events and character-specific episodes that give us more insight into their personalities. The story kicks off with the kendo club’s teacher getting into a bet he can’t afford to lose and having to grow and train his failing team, whose only mainstay member at the start is Kirino. Through this story the team gets to participate in matches, tournaments, the kind of stories you expect from a sports anime, with everybody in the team hoping they can somehow make it to the national tournament this year. Meanwhile it also juggles smaller stories in-between, like the team’s ace Tamaki getting a part-time job to fund her expensive anime hobby (I feel your pain, Tamaki) or Miya suffering under a stalker from her previous school. All the characters have their own things going on, even the teacher with his perpetual money problems, which lends the show some good slice-of-life content to fill in the spaces between training and matches. The show has 26 episodes on offer and I can guarantee you those went by fast.

#5 The boys have plenty to do

And a final decision in the story’s writing I enjoyed and wanted to point out was that the boys in the club aren’t entirely forgotten. The story is clearly centered around the five female leads, and while it does poke fun at how often Eiga and Yuuji get side-lined, they have their own scenes, matches, running gags, everything, including their own character arcs and final battles. 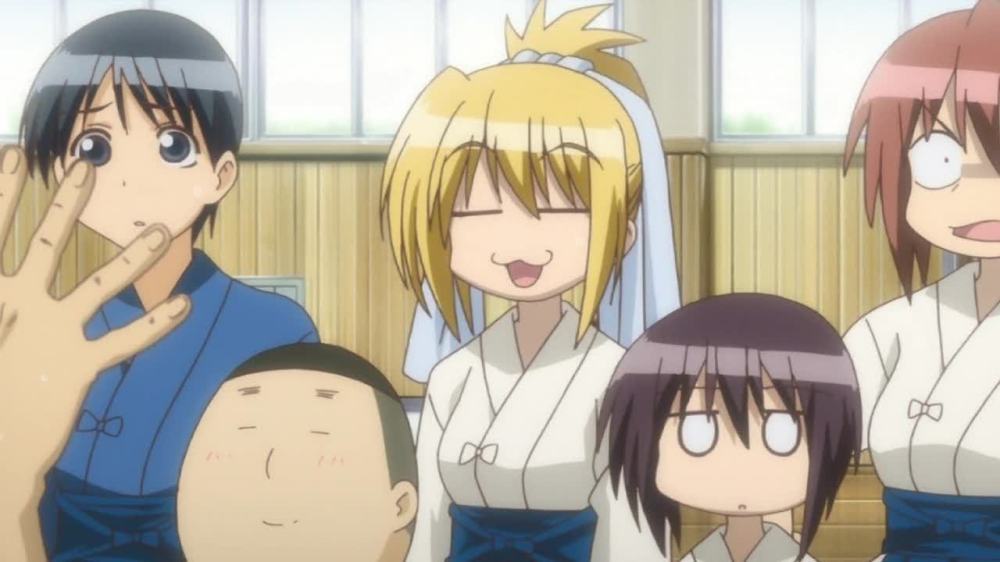 I like my cute “girls doing cute things” shows as much as everybody else here, but especially in seinen it’s a little over-represented. Yuuji is a chill guy, though, and often acts as the coach’s right hand man in a lot of matters. He has a generic design, yet is one of the stronger members of the club and I was interested in whether or not he would hook up with Tamaki somewhere along the line, as I got the impression he was looking for a relationship but wasn’t quite getting that notion through to her. Eiga is also a lot of fun, as he is unattractive and kind of silly-looking, but smart and totally earnest. He is Miyako’s boyfriend I mentioned earlier, so he has a lot of scenes with her and brings in a lot of good comedy. Though he is funny and small, it quickly turns out that he has an innate talent for kendo and can be a dangerous opponent when underestimated.

If I am to be honest, Eiga ended up being my favorite character in the show thanks to how much he develops and how often he surprises the viewer. I always appreciate when you have a comedic relief character that is not only good for a few laughs, but also ends up being a genuinely interesting character you root and care for.