#1 A second visit to the Soul Eater universe

Soul Eater is a 25-volume manga that ran from 2004 to 2013 and which was adapted into an anime in 2008, which itself ran for 51 episodes. It’s a shounen franchise set in a world where a select few people can transform into powerful weapons. The Death Weapon Meister Academy (DWMA) exists to pair these weapons with trained fighters, in order to have them hunt down the monsters and witches that oppose their ideals.

NOT! is a side-story set just before the events of the original series and presents a much different take on its universe. It stars Tsugumi Harudori, an average girl by most accounts, who one day discovers that she can transform into a halberd. Forced to abandon her everyday life, she transfers to the DWMA and enrolls in its NOT classes; a special branch not seen in the original story that educates weapons on how to responsibly live with their powers. Clearly this show is not set to follow in the footsteps of its predecessor and plays out as more of a slice-of-life comedy as opposed to a combat-heavy action shounen.

While it feels odd to watch a prequel that is so radically different, I was really excited to revisit the Soul Eater universe when I first watched it. The world and its themes are very much left in tact and though an average episode of NOT feels really different from an episode of Soul Eater, it still clicks with me the same in all the right places. If you enjoyed Soul Eater as much as I did, then you may need to get used to it for a bit, but you’ll find that NOT is a nice addition to the franchise.

NOT  is not shy when it comes to implementing cameos and manages to contrive many situations wherein familiar characters can interact with Tsugumi. Soul and Maka, Tsubaki and Black Star, even Kid, the Thompson Sisters, and many of the teachers, all make appearances throughout the story. This makes it interesting that they decided to give these characters a major overhaul.

Being a slice-of-life show, NOT has a much softer artstyle than the punk-inspired Soul Eater, which is reflected in the cuter designs for characters both old and new. Rather than taking the designs from the anime and attempting to rework those, Bones went back to the original manga versions and applied the new artstyle to those. Of course, much to the chagrin of fans who were fond of the old style.

While the look is more generic, getting to see the original manga designs animated is a delight. Especially the duo of Black Star and Tsubaki get the most of it, as the former is drawn to be much more muscular while Tsubaki gets the more sexualized outfit that was covered up in Soul Eater. While this is a matter of taste, the new look does work wonderfully with newly introduced characters like Tsugumi and her friends.

Upon arriving at the DWMA Tsugumi is immediately off to a wild start. While many different things go wrong for her, ending up in a feud over who gets to partner with her is definitely the worst of it. On the one side we have Meme Tatane, a slow, forgetful and ditzy, but really upbeat and kind girl that befriends Tsugumi almost immediately and displays remarkable competence when it comes to action. On the other we have Anya Hepburn, a formal and reserved girl that is skilled in martial arts, but struggles to express herself well towards her friends.

The three of them end up as roommates together and the situations they find themselves in I find really interesting. Both girls take a liking to Tsugumi and there are romantic implications, so there is a rivalry in there that can sometimes turn mean-spirited and personal despite them all being friends. Meanwhile Tsugumi is put under pressure to make a decision between the two and struggles with her personal feelings of inferiority. Episodes involve the girls getting a part-time job, investigating the mysteries behind Meme’s sleepwalking, and attending classes, but as times passes the story builds up some tension and the budding friendship of the girls is put to the test.

While it’s not the most original story out there, the three characters involved all have good chemistry together and there are some novel twists in there that keep it fresh. They also manage to balance the variety well, so while a lot of time goes towards slice-of-life activities there is still ample room for some mystery and action. After all, this is still Soul Eater, where monsters, witches, and other horrors are all out to disrupt society.

#4 More love for Kim and Jackie

Though I fully enjoyed the Soul Eater anime, the fact it went for its own, original ending somewhere at the halfway point is still a shame. I find that the manga handles it all much better and one thing I can’t forgive the anime for in particular is how it pretty much cuts out Kimial Diehl and Jacqueline entirely. Safe for a scene or two, these two girls make almost no appearances at all, while in the manga they play a major role in the second half of the story.

This injustice is rectified (somewhat) here, as Kim and Jackie play a big part in the story of NOT. Here we get to see them before they became a team and a large part of the story involves Tsugumi and her crew befriending the two girls separately and helping them partner up. Kim is a girl that looks fun, but most of her peers regard her with fear because of her bullying and extortion practices. Meanwhile Jacqueline seems like a poor fit for a partner, as she is a more serious and earnest person. Considering her own problems Tsugumi may not be the best person to play Cupido for others, but surprisingly she does manage to help Kim and Jackie figure things out.

The arc that forms around this is really well done and manages to fit in all the important character moments and twists from the Soul Eater manga in a new, simplified form. It’s also just really neat that besides getting Tsugumi’s story, we also get an original tale for some of the interesting side-characters. On that note, if you are a fan of the Thompson Sisters you’ll be happy to hear they get a similar treatment in NOT.

And speaking of anime endings, Soul Eater NOT! also manages to nail that aspect much better than its predecessor. The final few episodes are really cool to watch because they both conclude the slice-of-life story, while also delivering on a Soul Eater-worthy conclusion with creative and well-directed action sequences. We get to see Tsugumi, Meme, and Anya resolve their personal issues and fulfill their part in fixing the crisis keeping Death City in its grasp, while all across the city we get to see the rest of the cast fight battles of their own. 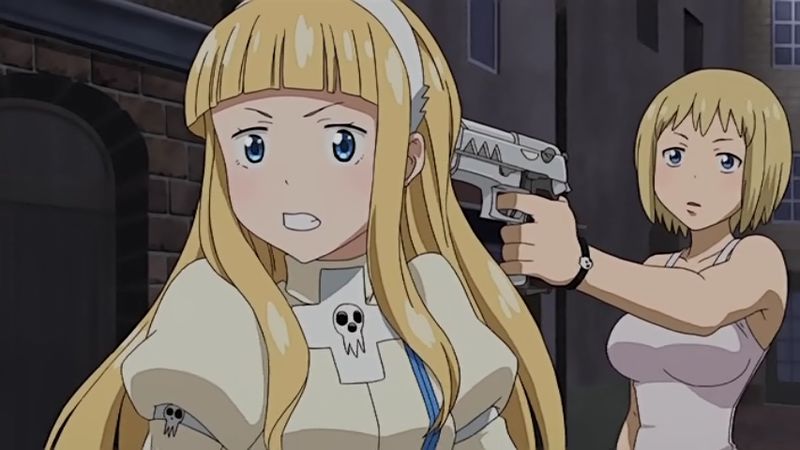 To me it really delivers on what makes Soul Eater NOT! such an interesting project, it being a slice-of-life story set in a violent, dangerous world. It’s about the characters and how they have grown, what they experienced together, and their bond, but these themes don’t just serve the character arcs, as they also allow our heroines to stand up against the evil that has tormented them throughout the story. The villain Atsushi Okubo cooked up for this finale may not have the impact of Medusa or Asura, but is a perfect fit that manages to be villainous in a way that forces the usually-passive NOT students into a fight anyway.

The manga does include an extra chapter that was left out of the adaptation and there are significant differences between the two versions, yet nothing that is so terribly important it can’t be missed or leaves plot threads dangling.