The premise of the movie is that in the distant future a war breaks out between humanity and a race of aliens with shapeshifting powers. A group of Humans, who are not introduced beyond their names, come together to discuss the imminent invasion. The aliens intend to use “The Cleopatra Plan” for their attack, and though the Humans are in the best position to determine what that might be, none of them have a clue.

Instead of opening up a history book and reading about Cleopatra, they deem the best possible solution to be time-travel. Using a special machine, three of the four members of the team are transported to somewhere around 50BC. There they take on the roles of three historical characters that had a connection with Cleopatra, except none of them seem to realize it after they arrive. Considering it’s just five minutes at the start and two minutes at the end, I am left really baffled as to why this hopelessly convoluted story was thought up. At the end of the day these three characters are just passive observers for the most part, who end up witnessing Cleopatra’s story without having much influence on it at all. The conflict they were doing all of this for is also resolved off-screen at the end of the movie.

After we get that introduction out of the way, the rest of the movie plays out as a strange retelling of Cleopatra’s life, her ascension to the throne of Egypt, her relationship with Caesar and Mark Antony, all the way to the rather obvious ending. This is what drew me to the movie to begin with, as the tale of Cleopatra and Caesar is perhaps one of the most engrossing tales of ancient history. 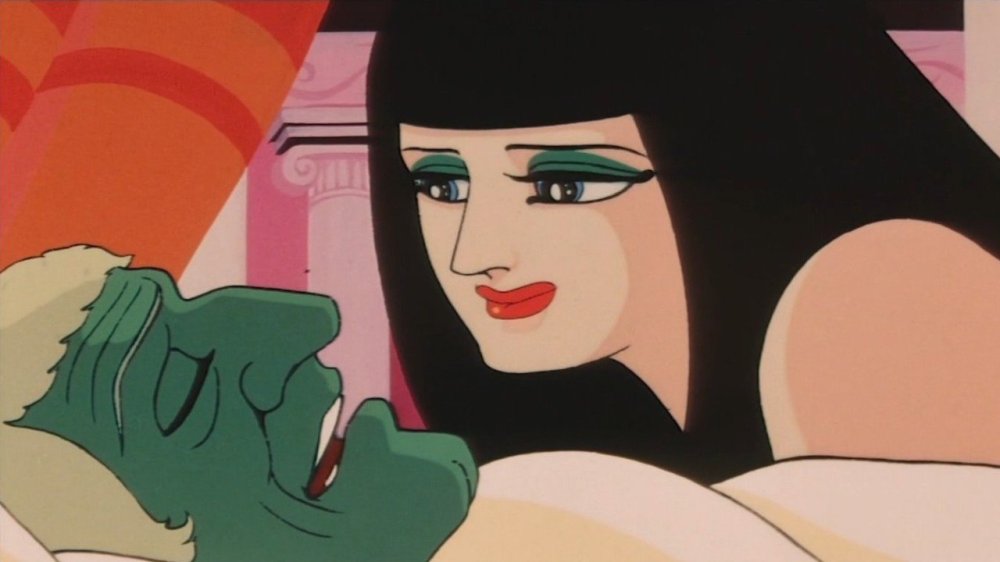 I won’t say that adapting it to any kind of media is easy, it’s just that all the fantastic drama, plot-twists, and intriguing characters are already written out for you. Despite the excellent source material they get to work with, Cleopatra just ends up being a really dull movie. Clocking in at almost 2 hours, the film takes forever to get going and is tediously prolonged once it does. All the characters lack the charisma of their historic counterparts and a lot of the big moments like the Ides of March or battle between Octavian and Mark are poorly done.

You know what’s shocking? This movie was directed by the legendary Osamu Tezuka himself. Osamu Tezuka, the man we know as “The God of Manga”, directed an anime movie about one of history’s most interesting moments, and somehow it ended up this abysmal. Osama Tezuka got to bring the Ides of March to Japanese animation, and it was the worst scene in the whole movie. The more I watched of Cleopatra, the more I wondered if I somehow ended up getting the wrong movie. How could this happen?

Part of the reason why the movie takes so long is because it has a lot of experimental segments in it that take up a lot of time. That opening and ending bit in the far future, for example, is filmed as a live-action segment where the actors’ heads are replaced by animated ones. Later in the movie there is a long sex scene that is just all-white with character outlines that move around, and a triumph in Rome that just has some surreal stuff thrown in it for good measure. 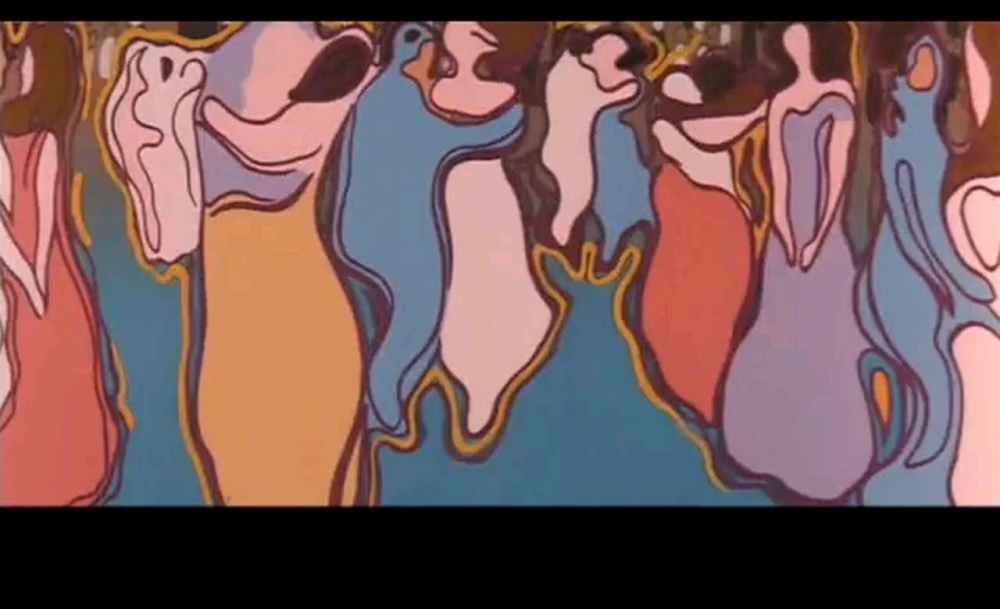 I can maybe argue that the animation, for 1970, is technically impressive, and if you are into artsy anime then maybe you can find some appeal in these bits. However, when we first saw the characters in the live-action part, my friend and I just burst out in unstoppable laughter. It looks terrible, almost objectively so, and I have seen enough older anime movies to know that this was certainly not due to its age or anything. In fact, once we are in Egypt much of the animation looks darn good, it’s just that whenever they try something experimental it feels like a massive waste of time and resources.

While browsing Wikipedia to read up on the movie’s initial reception, it mentioned people demanded their money back from theaters. I wasn’t around in 1970, but if I were I would no doubt be among them, if I wasn’t booted out for all the laughing at that point anyway.

Besides adapting a historical drama, the movie also lists itself as a comedy. Humor is always going to be subjective and all that, but the highest praise I can give the movie is that it was sometimes a bit funny. There were a few shots I could appreciate, a few subtle jokes that hit their mark, yet those are hard to appreciate between the absolute onslaught of creatively-lacking, simplistic gags.

Most of the actual jokes just consist of the animators throwing random stuff on the screen or characters behaving like they are in a cartoon for kids. A character like this movie’s version of Mark Antony has no place in an adult-oriented comedy for example, and many scenes that had a lot of potential just devolve into uninspired, slapstick sketches.

So why is this movie listed as a hentai with a self-granted X-rating? Well, despite the rather childish adaptation of the classic story and the style of comedy they went with, somewhere along the line the decision was made to put a lot of breasts in there. If you were hoping to see characters actually going at it, then you’ll have to do with artsy interpretations of sex scenes, because none of that actually happens visually. I can’t make any claims about this, but it really seems they gave themselves an X-rating in the hopes of drawing attention to the movie.

If they covered up the female characters this could easily pass for a movie aimed at a teenage audience. In fact, even as it stands it’s perfectly fine for anybody over 15 or so, assuming they can handle a few animated titties and the mildest of cartoon violence. They’ll probably be bored out of their minds, but it’s unlikely to mentally scar them or anything.

The fatal problem here is that there is no vision. Sometimes sex is treated as something special that we have to dedicate several minutes of artsy animation to, showing nothing actually inappropriate in favor of trying to convey the emotions behind it to the viewer. At other times, sex is treated as fun and lighthearted, leading to a lot of vulgar jokes and silly animations. The movie is content to have every female character walk around bare-breasted, yet is too afraid to show the rest of the risque anatomy.

If they had the guts to actually make this an erotic-driven take on Cleopatra’s life, that would have been interesting. If they did away with all the nudity and made it a comedy movie instead, that I would probably enjoy too. This middle road is just all-around crappy and honestly kind of cowardly.