I realize one shouldn’t judge a book by its cover, but I felt relatively certain in my judgment when I went into Amanchu thinking it was going to be a simple “cute girls doing cute things” type of show, with scuba diving being the gimmicky theme this time around. While that held up to some degree, the more I watched this anime, the more it began to feel like a unique experience. When I finished episode 12, I almost felt guilty for initially thinking of it as just another comedy show.

The first few scenes of Amanchu immediately drew my attention. As I expected, it started off with a cute girl announcing her love for scuba diving, but then the second main character arrived and looked distinctly different. Main girl Futaba Ooki certainly looked like she was about to dive into the sea, but not with any of the proper equipment, if you catch my drift. Futaba is a person in a tricky situation for a girl her age: she is very anxious and struggles to socialize with people. This left her unable to make friends for most of her life and when she finally managed to find some, she had to move from Tokyo to Izu in order to attend high school, separating her from her friends.

Now in Izu, she has to start all over. No friends, an unfamiliar place, and she doesn’t have any hobbies or much else to do. Fortunately, she soon meets Hikari Kohinata, a bomb of excitable energy contained within the body of a green-haired girl. Hikari is into scuba diving and ends up fascinating Futaba, who can neither swim nor has a license to partake in it. Through this new hobby and the friends she makes at the school’s diving club, Futaba begins to slowly come to terms with the person she is, challenge herself to overcome her social hurdles, and strives to earn her diving license.

It has cute girls do scuba diving and comedy that is not entirely atypical for this kind of show, but Futaba’s struggles are the real driving force of season 1 and had me hooked to the show. As somebody that struggled with making friends in school, I found her story to be truly relatable and I think many young people might benefit greatly from watching this show and see how she copes with it.

Hikari is pretty much a personification of the 😀 smiley that has way too much sugar in her system. She is an adorable and hyperactive character that is very upfront about things, except when she has to genuinely express her emotions, making her an excellent partner for the quite and anxious Futaba, whose flustered reactions are good for a laugh too. Once at the club they meet all sorts of interesting people, like the intelligent but childish club advisor and the red-haired siblings that do almost everything together. 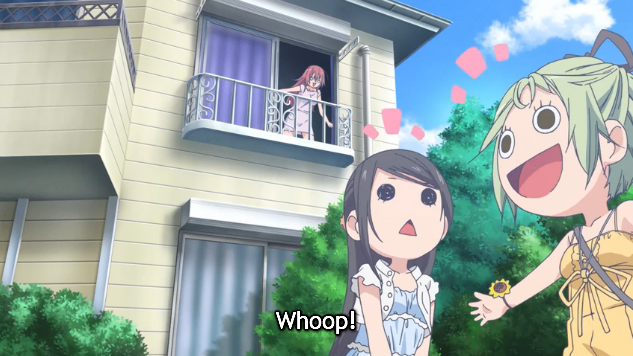 I had to shift gears for a bit when I started up this show, but by episode 3 I was completely enjoying it and actually had a lot of fun with all the weird faces you get to see. Usually, I find it distracting when anime does this kind of stuff, but Amanchu brought back fond memories of Azumanga Daioh, as one of the few shows where it’s so spot-on and cute you can’t help but love it.

Amanchu has a neat take on character design that, at the best of times, reminded me of Clamp manga. The designs are appealing with characters being much taller and more slender than anime would usually depict fifteen-year-olds. Their facial features and eyes are normal (for anime, of course) and I do also like the mix of strange and normal hair colors, with Hikari and the Ninomiya twins having interesting choices of green & red hair respectively, whereas Futaba and the teacher have more natural colors.

The costumes are also intriguing and kind of made me wonder if maybe I might be into anime fashion, because this kind of stuff gets me very excited. The school uniforms are long, full-body dresses that are light-purple and white, with a massive string instead of a tie, which looks absolutely gorgeous. In more casual settings the characters wear a range of different and interesting clothes, all of which I had fun looking at and helped make some of the scenes more impressive.

Something that stood out to me was a comment on an early episode wherein the poster jokingly mentioned he wasn’t used to anime where a school uniform didn’t have a preposterously short mini-skirt. On one hand, I’d argue that a lot of the clothes negate fan service, but then the show still has a few scenes containing fan service anyway and the character designs are appealing. Amanchu feels like a weird hybrid where shounen and shoujo design principals came together, and by some miracle, the end result is actually a show that I’d say works for both demographics.

Season 1 was a wonderful experience, and once you are finished watching this part of Futaba’s story, there is an extra OVA episode to enjoy. This OVA reunites her with her old friends, but presents an interesting twist that forces another character to overcome one of their shortcomings, much like what we have seen Futaba do all throughout the season. It’s a great extra episode that I’d say is well-worth watching if you enjoyed the main show at all. 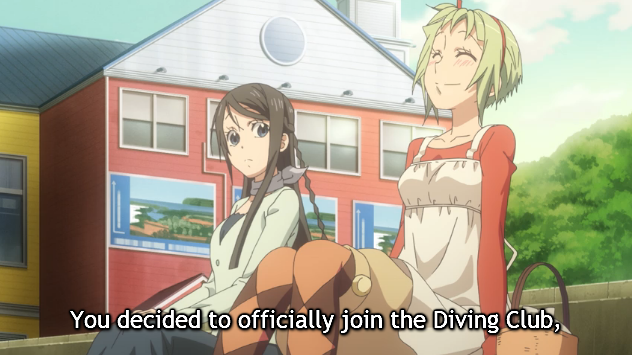 Of course, there is also season 2 airing right now. I mentioned in my recent article that a lot of these comedy shows I am pretty done with after 12 to 13 episodes, but if Amanchu can find some way to have another character-driven story with its second season, then I will definitely be on board for a second run.

Just like Bamboo Blade from a few weeks ago, Amanchu really tries to sell you on the activity that it is based on, but I have to say that Amanchu plays coy with it a lot. The ocean is kept out of reach at all times, this goal that Futaba wants to attain, but can’t quite manage yet until she gets her license. An interesting approach indeed, as it also keeps us waiting to see what kind of wonders are hidden in the water. As Futaba grows ever more excited to get her license, so too does the audience get hyped up for it.

I get the sense that Kazue Amano, the author of the manga this anime adapts, has a real fascination with water, considering she also penned the highly popular Aria series. When we finally do get to dive underneath the waves, I have to say it’s quite a sight. It’s majestic and well-animated, with lots of creatures to see and potential for comedy scenes. In the manga too these underwater parts stand out as some of the most well-drawn panels, it’s great stuff. That the anime keeps these from us till the very end of the show is a real sequel hook for season 2, which I can only imagine will have more frequent underwater adventures.