#1 It has no thematic connection to anything else in Higurashi

This is an odd kind of review for me to do, as most of the time, I try to review anime as a whole series. This is because my format isn’t suited to review seasons as separate entities, which are usually going to have very similar pros and cons to them. While I stand by my review for Higurashi – When They Cry, I had never seen Outbreak before and finally got an opportunity to watch it now. I sincerely regret making that decision.

Outbreak has the characters, presentation, and general ideas of Higurashi, but only on a surface level. Anything you might have liked from the original show is utterly and completely mishandled here. Did you like Higurashi for its intriguing and confounding mystery that slowly developed over the course of 50 episodes? Outbreak is effectively just a zombie story, the background for which is completely and plainly explained in a 10-minute long exposition sequence. Did you like it for the weighty and grounded violence, where murder carried real weight and was animated to be shocking and unpleasant? Oubreak just has characters jumping around during combat and murdering dudes by the dozens with no sense of impact or reality.

Really I could keep going like this, but somebody on MAL very accurately pointed out that Outbreak is like a zombie apocalypse movie. It has carefree murder, over-the-top action, killer viruses and conspiracies as to how it spread. This could be dumb fun, see also Highschool of the Dead. Outbreak‘s sin isn’t that it’s stupid, it’s that it’s being stupid in the Higurashi universe and throws out all the stuff fans liked to make room for whatever it needs to do its thing.

#2 None of the characters feel right

Higurashi is home to many characters I would rank among my all-time favorites and it felt particularly insulting to watch Outbreak take these characters and completely bodge them. It hurt even more knowing this wasn’t some fanfic nonsense, but an allegedly professional product by the actual, original creators. 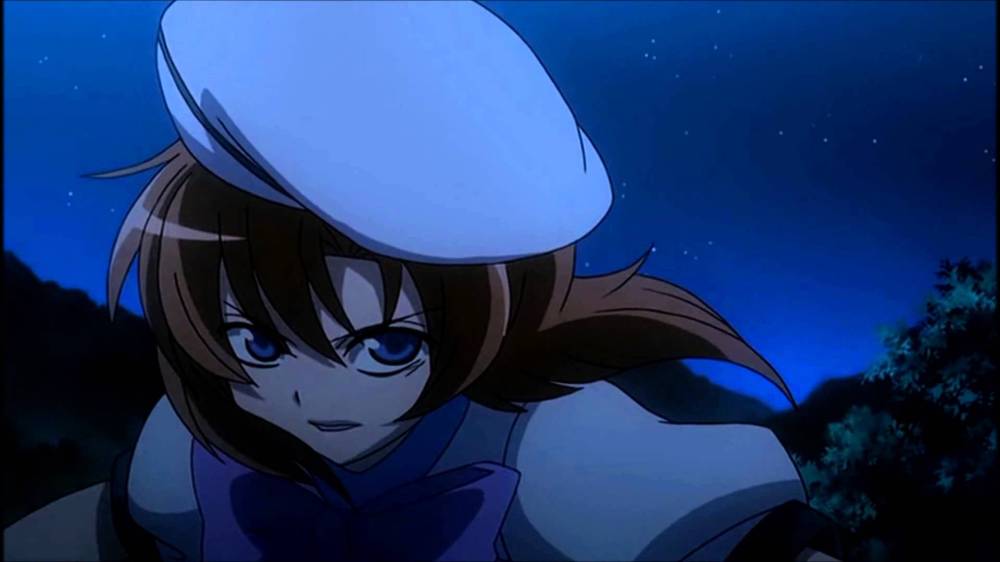 Rena and Keiichi get perhaps the worst of it. While we saw both of these characters turn to violence in past story arcs, these were slow and gradual declines in their mental state that were fascinating to follow. Even at their most desperate moments, neither character was quick to resort to actual murder. Especially Rena, despite being famously shown with her iconic hatchet, would almost always hit people with the blunt side. In Outbreak Keiichi and Rena link up together and don’t even think twice about immediately using deadly force. Perhaps a necessary evil, because everybody in the town suddenly has a ton of guns at their disposal.

Mion spends the majority of the film doing nothing, Satoko spends all of it being a damsel in distress, and Rika is just utterly apathetic to it all. While it is a slight spoiler, the scene that just killed the entire movie for me happens when Rena first meets up with Keiichi and casually remarks that her father was murdered. There is no emotion to back that up at all and she then proceeds to be this badass action girl throughout the rest of the movie. Really, if you liked the characters at all, then don’t bother. These are entirely different characters that only share the visual appearance and voice actors of Higurashi‘s stellar cast.

#3 It doesn’t have an ounce levity to it

I always appreciated it how Higurashi starts off each of its story arcs with a more lighthearted tone. We’d see the characters attend school, go to the festival, play games, and just all-around have fun together and strengthen their bonds. As you might have expected by now, Outbreak has exactly none of that.

Keiichi wakes up one morning and it’s all crap all the time from there on out. We get maybe one scene of Mion, Rena, and Keiichi having a good time together before it immediately nosedives into conspiracies, desperation, and talk of murder. From there on it’s a constant string of action, problems, and slaughtering people. Never do we get any fun interaction between the characters or a bit of comedy; it’s depressing, honestly.

On second thought, considering the state of the rest of the writing, I think not having any character moments or comedy is perhaps the better direction. A few less things for the writer to mess up.

Usually I don’t like watching movies much because they take up so much time, but Outbreak was only 52 minutes long and seemed like a fun way to conlude the monday with. Not only was it distinctly not fun, I also realized 52 minutes clearly wasn’t enough to complete whatever the creators were aiming for. Outbreak feels rushed and just kind of ends in the middle of nowhere on the strangest of cliffhangers. It’s the kind of ending that left me wondering if they were overconfident about their chances of getting a sequel made for this, or if they really believed this was a proper way to end the story. Considering it’s been 5 years, I think we’ll never find out.

Even if none of the above bothers you at all and a much more laidback, zombie-like movie in the Higurashi universe sounds appealing, then the fact it was left incomplete should probably kill it even for the most optimistic of anime fans.