There are countless anime that deal with some sort of conflict, but not so many that show us the world that remains after. Off the top of my head, the only ones I can think of are Cluster Edge and Chaika, both of which are stories that then deal with characters finding a new reason to fight each other. Violet Evergarden takes place in a 20th century-like setting and brings us to a country that is recovering from a long period of war.

The most interesting aspect of this, at least to me, is seeing how all these ex-soldiers now cope with returning to a peaceful society, which Violet Evergarden does in interesting ways. Violet herself befriends and begins working for a former commander she knew from her army days and much of the story actually revolves around her struggling to fit in now that the war is over. This becomes especially interesting when she begins to meet other people that are dealing with the same problem. It’s a great topic and one not many shows deal with.

Violet was a child soldier during the war that was inseparable from the major she worked under until the two were both wounded and she ended up in the hospital. Having lived her life only to serve and kill, Violet has a shockingly limited range of emotions and struggles to perceive how others feel. In conversation, she is blunt and forward, often to the point of being a bit cringeworthy.

However, the last order she received from the major was to live freely and, in their final moments together, he told her that he loved her. Unable to comprehend what this “love” means, she becomes determined to work as a doll, a person who interprets what people want to tell and records this in a letter by using a typewriter. While she is good at the typing part, her letters tend to be bland, practical, and more like military briefings.

While all of this is going on Violet also wants to find the major in the first place, who is conspicuously absent. Watching her struggle with learning how to feel and express emotions while also searching for the one person she cares about is… absorbing. The character arc that forms through everything she overcomes and experiences ended up being absolutely wonderful. By the end of the show, it’s almost weird to compare how Violet is then, compared to the almost robotic character she is at the start.

Most of the show focuses on emotional character development, but as a rare treat, it features a number of action scenes that are remarkably well-directed for a show where it’s not supposed to be the main focus. These come in the form of flashbacks to the war, which explore the bond between Violet and her major, as well as a climactic storyline towards the end of the series. 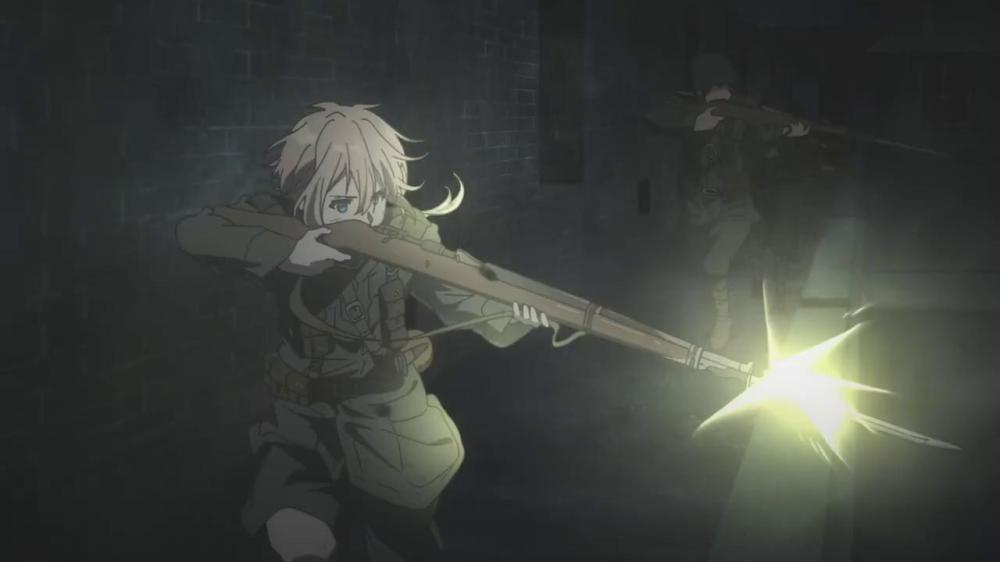 What makes this work particularly well is that the show gives real weight to death, even when it involves characters you’d consider unimportant. There are no faceless, filler characters populating the show’s backgrounds, and many of the side-stories involve everyday people. Everybody has a story and loved ones they hope to return to, so when fights do break out they aren’t treated as thrilling and fun, especially towards the later part of the show when Violet’s view on war has drastically altered.

For variety, it’s definitely nice to have these action scenes and they contribute to an exciting ending that nicely concludes the arcs of Violet and several other main characters.

#4 The Voice in My Heart

The music for Violet Evergarden has been provided by the Canadian musician Evan Call, who has been doing numerous soundtracks for anime for a while now. To nobody’s surprise, Violet Evergarden has a touching musical score that fits its emotion-driven stories and expressive characters. The stand-out track for me, however, is “The Voice in My Heart” and… well… just give it a listen.

It’s a beautiful song, sure, but neither happy nor sad. I was always entertained when it started to play, though, and it calls up feelings of wonder and intrigue; it has a dream-like feel to it that makes me feel particularly calm and relaxed. Fitting, perhaps, because most of the time when it played, the show was doing some calmer scenes, like Violet wandering the city while contemplating on the recent changes in her life.

After the first few episodes focus mostly on Violet herself, the show shifts gears for a while and has her go through a number of one-episode mini-stories that call upon her skills as a doll. While I was doubtful about this approach at first, it’s a smart way to let Violet improve herself through the emotions her work brings up in others, and the cast of side-characters for these mini-stories is interesting too.

One story will see Violet working with a depressed creative facing a writer’s block, the other with a scholar who is bullied by his co-workers, and seeing how Violet interacts with them and how they help each other further made these some of my favorite episodes in the series. Also neat is that these side-stories all get a fantastic payoff and multiple call-backs, which I won’t spoil.

All I will say is: have fun trying to hold back the waterworks around episode 10 everyone.