Putting historical or fantasy creatures into the modern day world has long been a good topic for comedy, and Dragon Maid sets out to provide a fresh take on this reliable trope. The story stars Tohru, a mighty dragon from a fantasy world that is wounded in battle and escapes by warping herself to another world, namely ours. There she is found by a severely drunk woman called Miss Kobayashi, who ends up helping her. Out of gratitude, they drink the night away and Kobayashi accidentally agrees to hire this mighty creature as a maid for her small apartment. 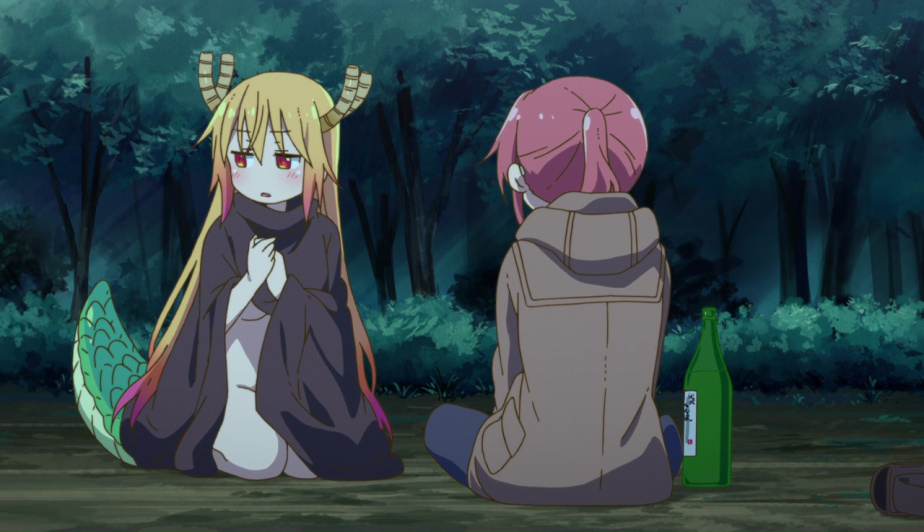 The story then follows the life of these two as they live together as employer and maid, with Tohru taking on the form of an attractive, young woman with horns and a tail. This leads to a lot of fun interactions, as Kobayashi tries to befriend and understand this fantastical creature and Tohru attempts to figure out Human society and technology. Both of these efforts run into their own, hilarious problems, which only become more complicated as various other dragons begin showing up to check on Tohru.

An intriguing theme running throughout the show is the dragons wondering how worthwhile their interactions with these mortals should be. A creature like Fafnir cautions Tohru for the hurt she’ll feel when those she has started to care for inevitably pass away, but other dragons like Lucoa and Tohru herself choose to grow closer and cherish their connection with these people. It’s a strong driving force for the show’s character development and lends the relationships a bittersweet touch.

Good characters are central to any comedy series and this is also where Dragon Maid excels. What I appreciate in the story’s writing, and which I also found abundantly present in the writer’s other works, is that his characters are funny, but the traits that make them so entertaining are part of a larger whole. Both the main and side characters are interesting people who all have their own ideas, struggles, qualities, and flaws. 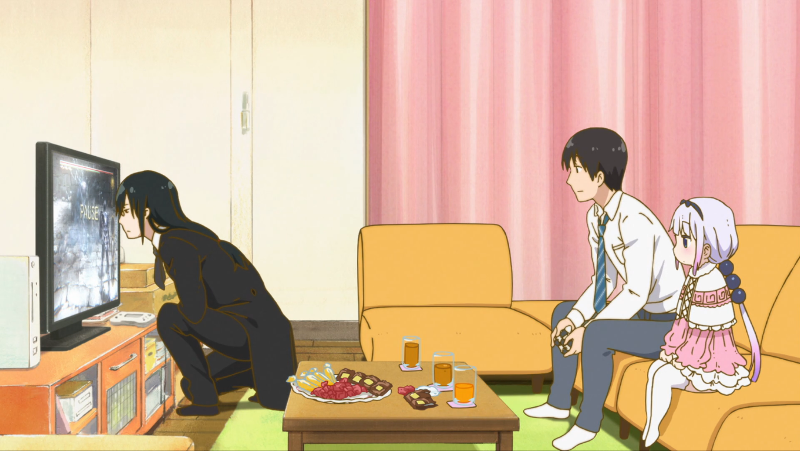 I have watched countless shows where I could laugh at characters. Shows with ditsy moe blobs that stumble through life, shows with fierce tsunderes that direct abuse at the hapless, young men who wrong them, and oftentimes those get a laugh out of me. But in Dragon Maid the characters don’t feel like cartoons I am simply meant to laugh at, rather they are developed characters whose stories I am invited to watch unfold. That they are entertaining and get us to laugh are just the cherry on top of all that.

Perhaps it says something about my own romantic experiences, but in media I always prefer it to be direct and to-the-point. Tohru provides just that and from the very first episode on openly admits to being in love with Kobayashi and having a sexual interest in her. Except if you watch the English dub, because Funimation’s writer was really determined to shut that down for some reason. While Kobayashi herself never confirms or denies it, and is apprehensive about the whole deal, it’s endearing to watch her warm up to Tohru while keeping this romance in mind. The two share many touching scenes together, as well as some comical ones like Kobayashi trying to get Tohru to please stop licking her laundry in order to wash it. Whether it is friendship or love, the anime makes their relationship intriguing to follow and it becomes especially important in the final episode.

Miss Kobayashi’s Dragon Maid was produced by Kyoto Animation and directed by Yasuhiro Takemoto, who also handled Hyouka and The Melancholy of Haruhi Suzumiya; two of my favorite anime from KyoAni and definitely some of the best-looking ones in their library. Dragon Maid has all the qualities you’d expect from a show made by this studio: beautiful backgrounds, good-looking characters, great animation, it’s all there. What really sells it, however, is how much effort was put into the duality of Tohru’s character.

All the dragons seen in this show look fantastic in their own way, but there is a special appeal in the traditional appearance of the great, green monster that is Tohru’s actual body. She can be imposing and scary, as well as dopey and fun in the more lighthearted scenes. Usually, however, we see her in the appearance of her Human form and that is when a lot of fun details are shown. She looks like such a cute character, but then she senses a threat and her small hands turn into vicious claws, or when she has to eat a big piece of food and you see her open her wide mouth and tear it to pieces with sharp teeth.

There are a lot of these animations that play around with Tohru’s ability to transform and one memorable scene, in particular, is this short battle between Tohru and another dragon. This is in no way a show about fighting, yet Kyoto Animation went out of their way to include this bombastic action scene that blows many other anime out of the water.

#5 Kanna is the cutest

Man, I thought my standards for cute characters in anime was pretty high already, but I am pretty sure that Kanna has raised the bar even higher. Entering the show early on, she is a beautiful dragon and a friend of Tohru, who ends up trying to find her in the Human world. When she finds her living with Kobayashi, she eventually joins them and becomes sort-of like a daughter to the two of them.

She makes for a fantastic addition to the cast and has many interesting storylines to her that would already make her a fantastic character. I am especially fond of the episode where she wants to start attending school and interact with Human children. On top of having a major role in the story, her design is so darn nice. Described in the show itself as a cute loli goth with a tribal theme, her clothes, hairstyles, and horn shape all fit together so elegantly. I actually decided I wanted to see the show back in the day because I saw gifs of her pop up online and the character design just amazed me.

The voice acting by Maria Naganawa is spot on and really completes the character for me, which makes it even more unfortunate that the dub went with Jad Saxton. A phenomenal voice actress in her own right, but I always felt her best roles were those where she played older, more responsible characters, such as Jacqueline from Soul Eater or Itsuka Kendo from the currently-airing My Hero Academia. Her trying to sound like a little child, however, is not as enjoyable and definitely not on par with Naganawa’s performance.