Hyouge Mono takes us back to 16th century Japan amidst the meteoric rise of Oda Nobunaga. As the land is at war once again and influential generals fight over land & castles, the show instead focuses on a minor governor acting as a vassal under Nobunaga himself. Furuta Sasuke is a simple man with little power and only a small territory, yet even he must face harsh realities as Japan changes all around.

While we are afforded a lot of time to follow the plots and actions of figures like Hideyoshi, Akechi Mitsuhide, and the big man Oda himself, I find it very appealing to witness events unfold from Sasuke’s perspective. As the story follows the course of history, albeit interspersed with fictional additions, it leaves you wondering whether Sasuke will remain loyal to his lord or side with other powers.

Sasuke is no hero and scarcely qualifies as a warrior. He can wield a sword with some skill and enjoys some respect, but he really can’t live up the great people of the time and they themselves often won’t even give him the time of day. And it is this humble position amidst these great people of history that make him feel uniquely human.

Time and time again I found myself surprised by his actions and interactions with other characters. The show never paints him as heroic or particularly idealistic and thus he is allowed to be a flawed character. A moment that stands out is an early encounter where he is attempting to garner Oda’s favor by hunting down a traitor, only to then be ashamed after he allows the traitor to bribe him with a nice tea accessory, which Sasuke collects. Also memorable were his loving interactions with his wife and kid, and his genuine sadness when friends and allies pass away.

The more of Sasuke I saw, the more surprised I was to be reminded that he is not entirely fictional. While Hyouge Mono no doubt fictionalized his story somewhat, there is a real world person who lived this life.

#3 A nuanced take on history

I have seen a lot of anime and played a lot of games that take place in the Sengoku period and, frequently, this type of media tends to exaggerate and simplify the actual events. Oda Nobunaga is often painted as a tyrant clad in black armor, Akechi Mitsuhide as a treacherous coward, and Tokugawa the righteous, unquestionable good guy who saved all of Japan.

Hyouge Mono does not participate in this and paints all these familiar characters as more nuanced individuals who acted based on what they believed in. Akechi Mitsuhide is treated especially well, Tokugawa’s noble idealism is shown to conflict with his narrow-mindedness and poor temper, and Oda is tyrannical, but not devoid of any humanity. It’s a rare pleasure to see this kind of take on history outside of purely educational media.

And one field where Oda especially shines is in his many absurd costumes and armors. Somebody, be it the original manga artist or the anime’s own character designers, went above-and-beyond to create beautiful clothes and armors specifically suited for its characters. Or, in Oda’s case, anything that looks weird and kind of hilarious. 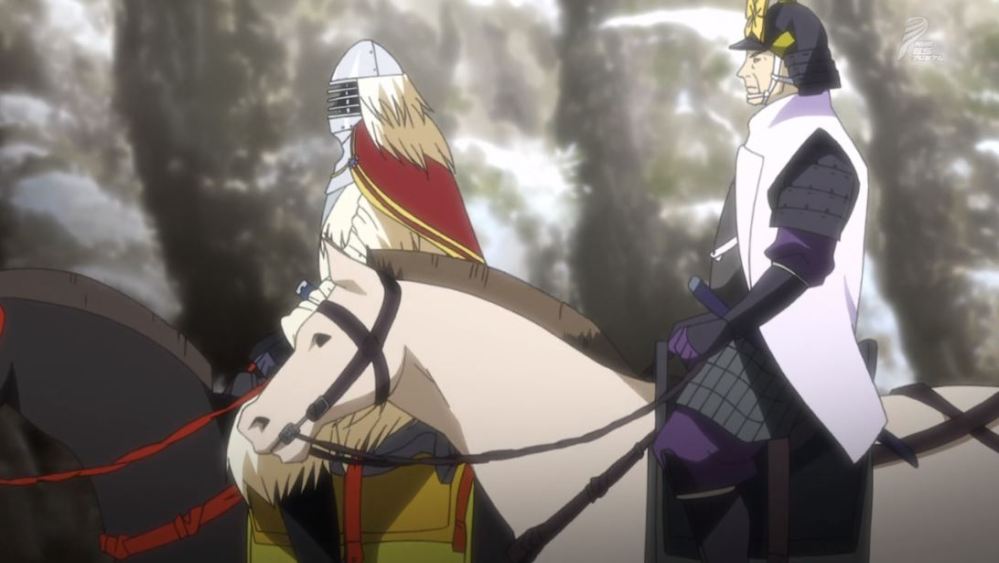 Whether it’s Oda with his Western-inspired armors, Hideyoshi with his tasteless get-up, or even just Sasuke with his humble robes, every important character looks and feels just right. And I have to be honest: the fight animation isn’t spectacular and much of the show consists of lengthy conversations and drinking. It’s not exactly exciting, but the great design of the characters keeps it visually pleasing to watch.

#5 The obsession with aesthetic

Cool samurai battles are always nice and Hyouge Mono does indulge in a few of those. However, Sasuke’s field of expertise is not combat, it’s art. Sasuke starts off as a mere collector of teacups and spoons, yet desires to be educated in the ways of the tea ceremony and become recognized as one of the finest aesthetes of the country.

The show has a political feel to it as Sasuke competes with other lords to receive rare treasures and cooperates with the emperor’s own Master of Tea to establish new artistic movements. Sasuke attempting to create his own treasures that might impress his teacher or getting in trouble over his art being misinterpreted as an insult are interesting trials, certainly not the kind of material you find in other shows. I also just love his wacky expressions when he spots a piece he really enjoys.

This contrasts well with his master Soueki, a frighteningly stoic Master of the Tea that forces his views on art, namely the practice of imperfection, on everybody and everything. The show also makes “villains” out Hideyoshi and Ishida Mitsunari, in part by making them averse to art. Ishida in particular makes it a point to antagonize Soueki and his disciples, Sasuke included. This leads to interesting stories like Sasuke attempting to stop Ishida from executing a Man of Tea he respects.