Love Hina was hardly the first anime to categorize itself in the harem genre, but it’s one of the major titles from the genre’s history when it was still relatively fresh and developing the tropes for which it would become famous. This means that some might experience Love Hina as outdated, but personally I draw a lot of enjoyment from its nostalgic style. The story follows Keitaro, a struggling student looking to get into Tokyo University when he receives a call from his grandma. She invites him over to stay at her hotel, only for it to turn out that she is retiring and wants him to take over as manager. Furthermore, the hotel is now a girls-only dormitory, which he finds out the hard way after a relaxing bath spins out of control and the girls attempt to chase him out. After the truth is revealed, everybody has a laugh and accept him as the new manager… Oh, who am I kidding?

While they are no longer actively hunting him down, Keitaro will have to deal with many misunderstandings. Accidental gropings and walking into rooms as the girls are (partially) naked are commonplace and frequently get Keitaro beaten up, and other incidents can spiral out of control and lead to episode-long problems for the cast to resolve.

Keitaro is trying to get into Tokyo University to fulfill a promise to his childhood crush that they would meet again there, making it all the more embarrassing that he has failed his entrance exams several times now. Still, I find it a cute part of his character that he is working for something so ambitious on a gamble that this girl from his past remembers the promise to begin with. Even as he himself admits that he doesn’t even remember her name. 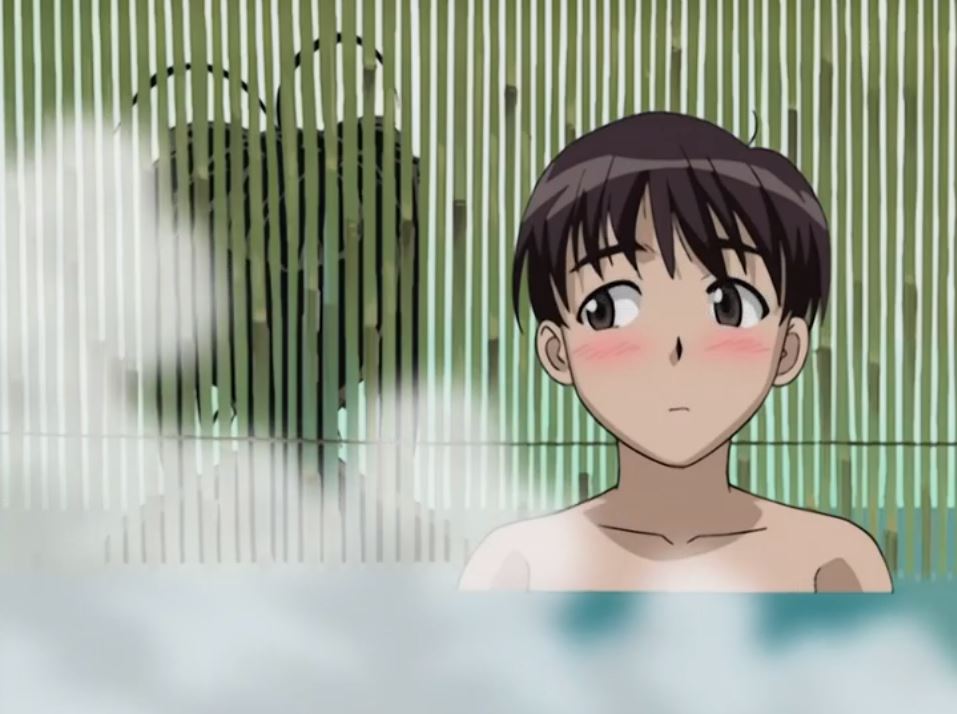 Still, within the chaotic environment of the hotel turned girls dormitory turned mixed dormitory, all bets are off. All the girls end up admitting that Keitaro has his strong points, some even that he is physically attractive to them. Keitaro is indeed intelligent, ambitious, good-hearted, and artistic, so while he has his flaws, it’s not like all the girls are fawning over him for no reason.

Harem anime always come with the question of whether an actual couple will ever emerge from their chaos, and Love Hina certainly kept that question alive. Characters share nice moments together and grow closer to each other, plus there is the overarching question of whether Keitaro will get into university and if the mysterious childhood crush will indeed be found there.

Love Hina presents itself as the purest form of a harem comedy, with the first few episodes collecting the entire cast together and dealing with silly subjects like the importance of a first kiss, the girls thinking Keitaro might be on a date and wanting to spy on it, that kind of stuff. However, the show also has episodes with slightly less normal subjects. 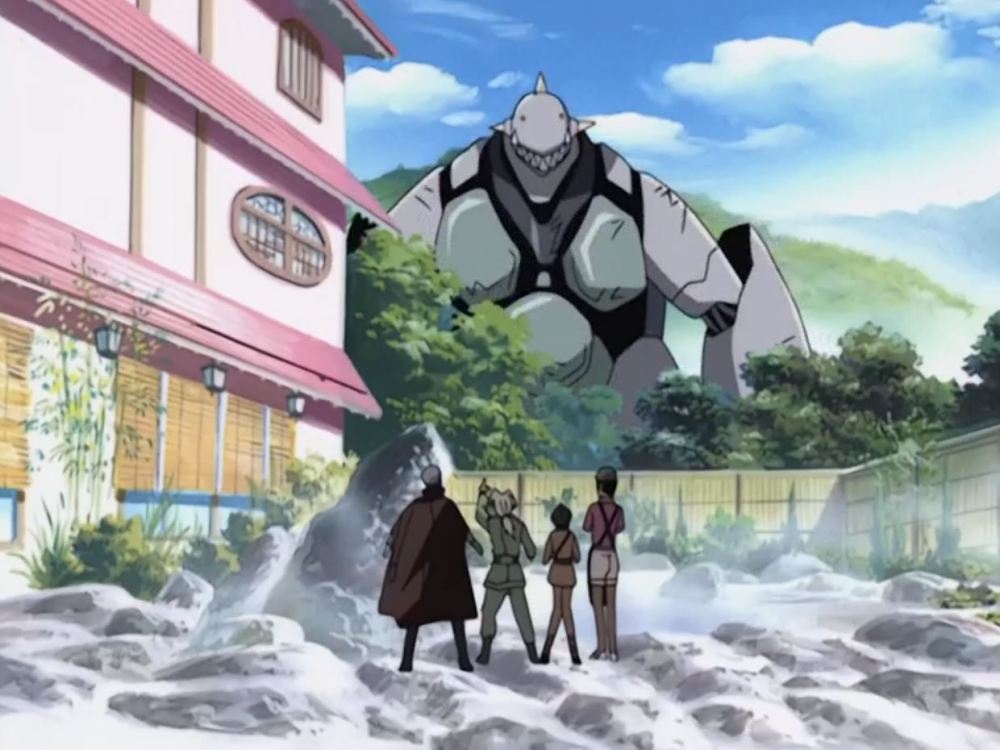 One episode sees the characters try to deal with a giant robot accidentally released by Su, Motoko’s swordfighting arts are blatantly magical, and there’s even an RPG-inspired episode. These get mixed in with the more common episodes, so you never quite know if the next one will be about a forgotten crush resurfacing or about a mysterious magical girl. It keeps the show unpredictable and, once you get used to it, these departures from regular harem stories aren’t that jarring at all.

A bit of a dubious argument, but I found it interesting to watch Love Hina and see how it treated the character of Su. After all, much has changed in 19 years and the depiction of foreign characters in anime is no different. 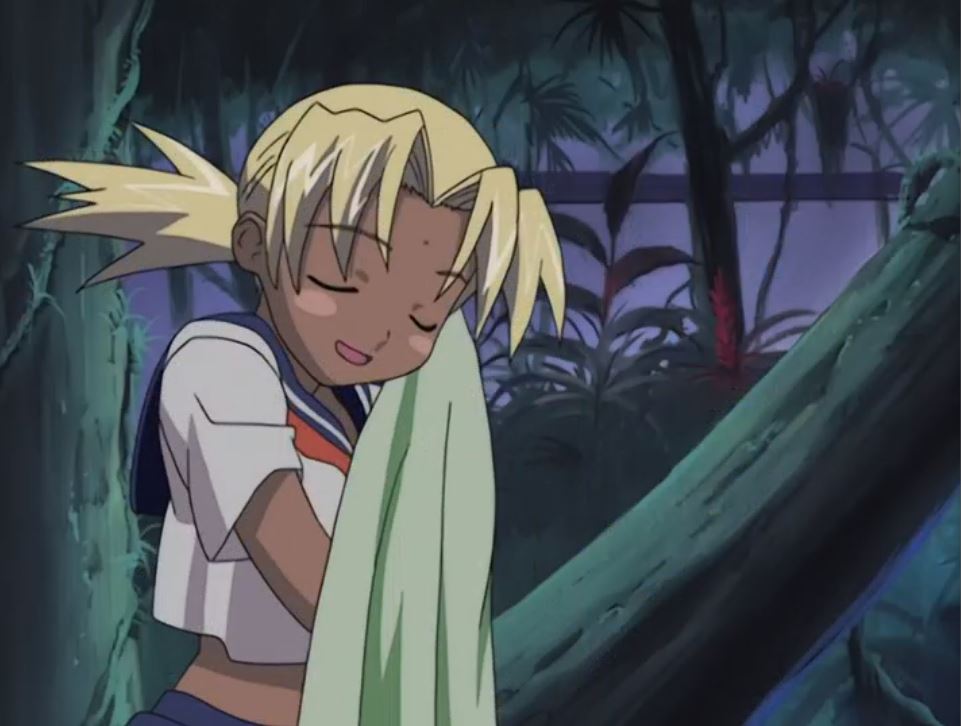 Su is a young girl from a country that she keeps secret, and the show uses this unknown origin to pin multiple stereotypes on her. She is hyperactive, climbs on everything, has a passion for militarism, eats lots of bananas, and her room is a jungle where she sleeps in the trees. In fact, the first time we see her room it’s accompanied by monkey sounds. It’s awkward and embarrassing, but also a good reminder of how “unfortunate” our medium could be in the past.

And fortunately, there is more to Su than just these jokes. The most important counter to the stereotypes above is that Su is incredibly intelligent and loves inventing high-tech devices. It doesn’t entirely excuse the show’s more blatant jokes at her expense, so those who are sensitive to racially insensitive content may want to consider if they find this acceptable or not. 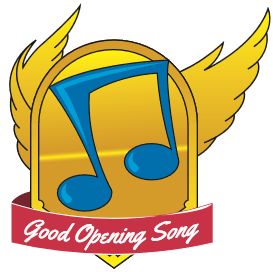