The abbreviation stands for Eliminate Dangerous Doctors and while that may sound like a militaristic anti-vax cult, the reality is potentially even worse. 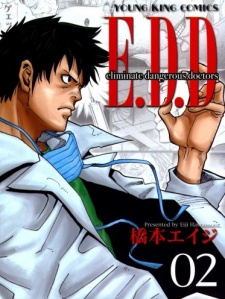 Putting us in a world where the medical profession is quickly deteriorating, our protagonist is a member of EDD, an organization that traps doctors suspected of medical malpractice and “eliminates” them. Elimination appears to mean anything from simply exposing and arresting them, to brutalizing or even executing the targets. And therein lies the fatal flaw: E.D.D. is in such a hurry to appear cool that the writing just feels kind of random.

It’s shooting for a more adult audience, but has characters with stupid catchphrases and storylines that feel pointlessly edgy. There is a bunch of torture and rape thrown in, but also this spiky-haired kid who is super badass and overpowered. Just the entire concept of a bunch of murderers that get to brutalize doctors who are all unreasonably evil feels so stupid. I joked about anti-vaxxers in the beginning, but the entire tone of E.D.D gives the impression that it was written by somebody with a severe hatred or fear for medical professionals.

E.T.O. is a manga of many ideas, but without the skill to tie them all together, the series as a whole ended up being a confusing and unsatisfying wreck. The story attempts to juggle

the arcs of 11 main characters, all of them animal-themed ninjas who are destined to do battle with giant insect monsters. The concept is pretty weak and the cast of characters is too spread out to make any of them exactly memorable.

E.T.O. is a story that mostly just stumbles towards a conclusion. It throws in story threads that are entirely pointless or unexplained, character arcs are abandoned, villains forgotten, it doesn’t even have some good comedy or character interactions to make up the difference. In fact, many characters look terribly similar and that made keeping track of relations and roles even more difficult.

In its defense, this manga at least had the courtesy to end the story rather than canceling it midway through.

Eagle: The Making of an Asian-American President

Years before Obama would win his Presidential election, Eagle presented us with a manga about a Japanese-American senator as he attempts to become president

of the United States.

That senator is Kenneth Yamaoka, a Vietnam war veteran and democratic idealist who wishes to carry America into the 21st century. Writer Kaiji Kawaguchi takes the readers through the inner workings of the American political system and works in a ton of references to political talking points. Chapters can be about challenges like Yamaoka upsetting militarists by speaking out against the Vietnam War or facing opposition from racist extremist groups. It’s an intriguing journey to follow, even if Yamaoko comes off as a little too unbeatable. I certainly would have appreciated it if he faced more opposition on his rise to the very top.

There is also Takashi Jo, a Japanese journalist who is summoned to cover the campaign for his newspaper, only to learn that Yamaoka is his mysterious father who disappeared before he was born. Watching him cope with his mixed feelings and suspicion that Yamaoka may be involved in his mother’s death lends some personal drama to the story.

This is a romance manga centering around a small office that is part of a large corporation. 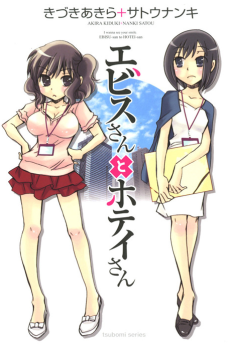 Chizuru Hotei is a data entry clerk for the company, but her quiet workplace is shaken up when the head office sends over Mayo Ebisu, a former rising star within the organization reduced to desk worker.

At first, the girls of the office pick on Ebisu because she doesn’t socialize much, doesn’t work overtime, and appears very conceited. Hotei accidentally learns the true reason for Ebisu’s behavior and begins to feel sorry, followed by her slowly developing feelings for her as well. I tend to like office settings like this and recently got a lot of mileage out of Ojisan and Marshmallow, but this manga is a little too short to make the romance feel particularly special. It rushes through its story and doesn’t really deliver on anything by the end of it. It’s innocent and fun to read, but could have done with some more chapters and character development.

This manga was the first, big surprise of the (mostly random) selection this time around. Yukari is a regular, Japanese high school girl until she is one day killed in a car

accident. She then awakens as the newborn Liliana La Oliviria, the daughter of a count in a magical fantasy world.

We cut to 7 years later when she is a kid first going into town with her father to inspect the realm. As she gets a sense of how the people live, Liliana starts to apply her knowledge of her previous life to introduce new ideas to the village. At first, these are farming tricks to better the lives of the people, then she starts introducing recipes, items, and concepts that can be patented and sold for financial gain. But, while she remembers much of Japan, she doesn’t know anything about magic and the ways of her new world.

Liliana is a very cute character and the story is comedically written, with fun side-characters that are quick to endear themselves. It’s light on drama without completely excluding it, so the main appeal lies in seeing Liliana try to get medieval people to understand and accept her ideas, which comes with many stumbles. The story is also a bit short, but covers a lot of ground and each storyline had great moments to it. The finale also rounds it all off nicely, making this a female-driven isekai that I can fully recommend.

Haruka and Eiko pretended to be superheroes in their childhood, until Eiko one day moved far away. Years later, Haruka has grown up and still thinks fondly of those

childhood adventures, but to her surprise, the day she enrolls in high school she meets Eiko once again. And on top of that, Eiko still acts like a hero to this day.

Echo-Pun is a 4-panel comic manga that sees Eiko start up a hero club at their new school and forcing Haruka to become part of her hero team, alongside the president of the school’s disciplinary committee and a fourth addition much later in the story. In that sense, it kind of feels like The Melancholy of Haruhi Suzumiya in a smaller format. Eiko is very hyper and always wants to do impossible, superhero related stuff, Haruka attempts to keep her in check, and Shiori tries to be responsible senpai despite constantly going along with the plans anyway.

Their adventures together are fun to read about and feel much bigger than you’d expect from a manga using a 4-panel format. I went into it not expecting much, only to be pleasantly surprised; it left me wishing there were even more volumes.

Eikou no Te / Hands of Glory

Eikou no Te is another one of those fantasy stories with lofty and ambitious ideas, which sadly falls short when it comes to actually executing them. It’s about a boy that one day 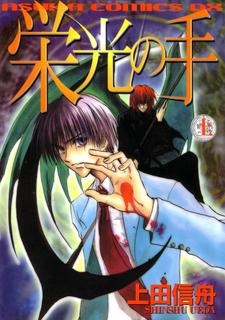 has a nightmare about being hunted by a reaper and, the following morning, blood seeps from his hand despite not having any wound. After that, he finds himself hunted by strange men clad in black, which claim the end times draw near and he may be the key to humanity’s next big step.

The story borrows a lot of Jewish terminology and concepts and that gives it an interesting bend, but its brief few chapters don’t manage to really endear the characters any. As the reader, I could almost feel the writer excitedly dragging me from place to place for the next, big story development, but I could never appreciate any of it because I had no connection with his characters or the fantasy elements the story included. Add in the sloppy art and rushed ending, and this is another story I simply can’t recommend because there are no real standout qualities to it.

Taking place in a Western-styled world, El Cazador is a kick-ass adventure about a gunslinging mercenary that sets out to protect a cute girl with mysterious powers. The

two of them have to reach a place far to the south, but a bounty is on their heads and not every scoundrel in this wasteland is exactly Human.

It’s a story I much enjoyed, it kinda felt like Trigun mixed with Gunsmith Cats in a way. It may only have been 6 chapters, but it was a wild ride all the way to the end. This leaves me with the burning question of how in the world this got a 26-episode anime adaptation. I’m impressed and I am going to watch that, but how???

Even with this anime around, I would still advice reading the manga first. The characters are all cool, the backgrounds are neat and busy, and it has a bunch of nudity and fan-service that I severely doubt will be present in the anime.

Another manga I was surprised to see an anime of was Emma, which was adapted to anime under the name Emma – A Victorian Romance. It chronicles the story of a

maid (Emma) working in the small house of a former tutor. When she meets with her master’s former student, the wealthy son of a business family, the two find that they click well together and a romance begins to blossom. Scandalous!

The two face a lot of opposition as their feelings develop, alongside other challenges of the Victorian era. The boy’s parents don’t support him marrying someone from the lower class and Emma’s master soon falls ill, putting the future of her employment into uncertainty. It’s a beautiful story to follow and it feels distinctly different from anything else in manga. The setting, the development of the romance, even the characters feel incredibly well-written and enthralling.

Once again, I can’t speak for the quality of the anime adaptation, but I really enjoyed my time with this manga. I can also imagine that this must be a personal favorite of Miss Kobayashi.

A short manga penned by none other than Ken Ishikawa, who co-created many of the pre-Gundam Giant Robot franchises alongside the legendary Go Nagai. This story takes

us to 13th century Japan, where a Mongol fleet is looking to invade the isolated country and add it to the massive empire of Kublai Khan.

The fate of the country rests on a group of 4 outcasts, soldiers raised in absolute poverty who wield bizarre weaponry and can survive the most impossible odds. It’s an action-heavy manga with some really nice art and appealing characters, even if the story is over before you even know it. Japan’s battles with the Mongols are also rarely discussed in history and popular media, so I learned a few historical facts here and it got me to read up on some of the interesting details.