#1 A fantasy epic in manga

Western-style fantasy is not something you encounter often in manga and anime. Sure, you have the ever-popular Berserk, but it often seems like authors are either not interested in competing with Kentaro Miura or just prefer to write Japanese fantasy or subgenres like isekai stories.

Helck scratches an itch I have had for a long time. To have another western-style fantasy manga with a long-running story and an exciting adventure at the core. An actual swords & sorcery, warriors & monsters, knights & nobles fantasy epic. I am absolutely delighted. It has a map with all these countries, all these people and cultures to discover, there are wars and princesses and evil mages and warriors dying heroic deaths. Fuck yea! I love fantasy!

#2 A human in the demon world

The story starts off by establishing that Demons have various kings to reign over the castles spread across their massive empire. A Human hero has recently penetrated deep into their lands and slain one of their kings, so a contest is being held to determine who will succeed this fallen lord. To everyone’s surprise, this contest includes the human hero Helck. 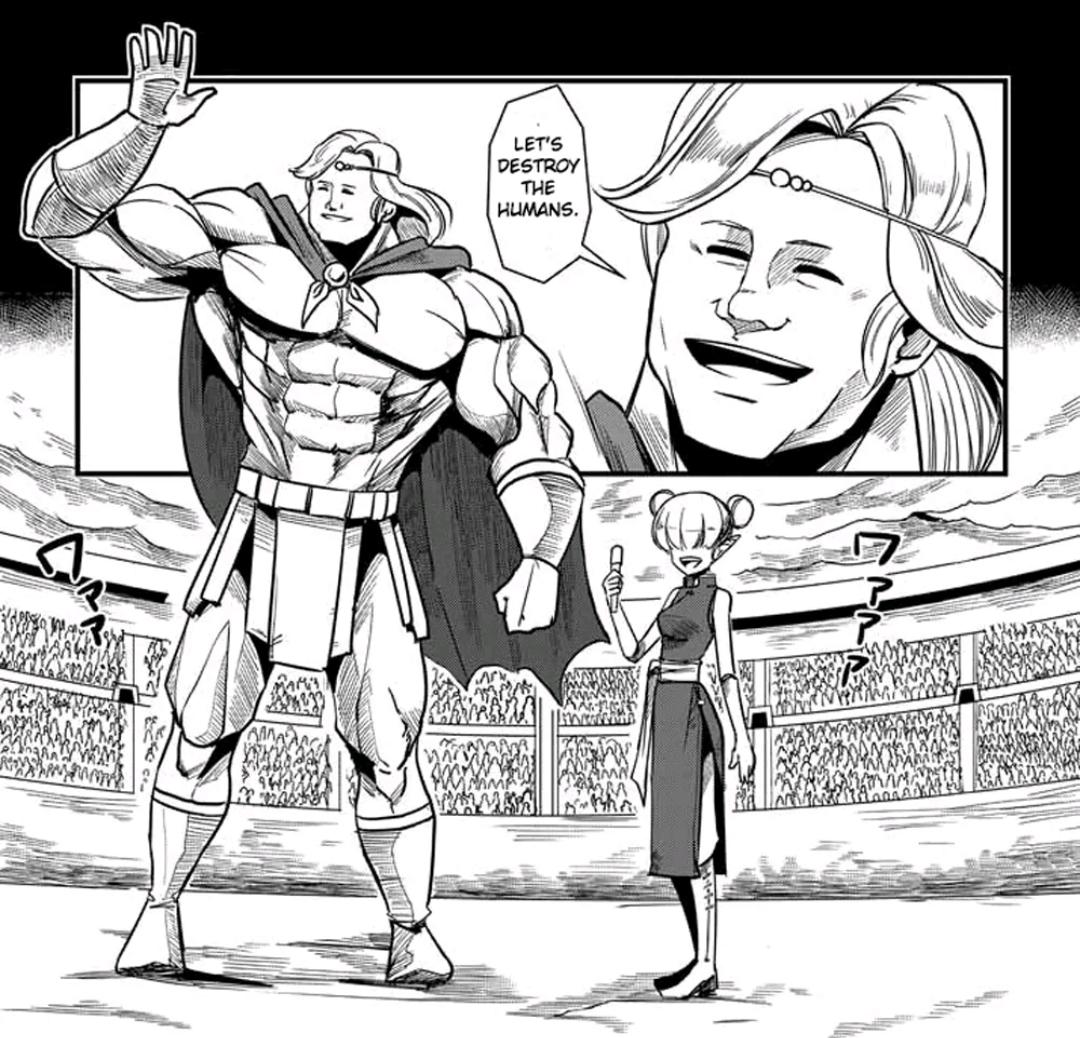 Helck is an absolutely massive bloke and a warrior that few could hope to even compete against. He is all smiles and seems incredibly friendly, but in competitions, he is always the fastest, strongest, most agile, and often even the smartest. He quickly plows through the first matches and catches the eye of Red Vamirio, a high-ranking demon who is very angry with Helck getting into the tournament, and even angrier with how easily all the Demons have accepted him. She begins to try and sabotage his chances of winning, but no matter what kind of competition she comes up with or what handicaps she forces on him, Helck is simply too good at everything.

However, the tournament story only serves as an introduction to the world and soon expands as Helck and Vamirio are teleported away to unknown lands and have to find a way back home together. What really impressed me is that, from that point on, we finally begin to learn his backstory and see more sides of his character. Helck turns out to be a lot more well-rounded than his comedic first impression suggests, but the story also never drops that aspect of him, so there is still plenty to laugh at even late in the story when the stakes are at their highest.

The art and story were both provided by Nanaki Nanao, who to my knowledge has only written the fantasy story Acaria besides this. I don’t know what else she has done or will do in the future, but after seeing her character designs here, I’ll make sure to read it.

The characters of Helck have a goofy, Disgaea-like twist to them, with Demons having a humanoid appearance that mixes in fantasy tropes like wings, cat ears, or just turns them into human monsters. Helck and Vamirio enjoy some solid designs, with especially Helck being amazing. The first time I saw him I send a picture around to my friends because I couldn’t believe I was about to read a story with this man as the main character.

Many other memorable people and creatures appear throughout, like the weird bird creature Piwi, the adorable tournament host Rococo, or this random dog-demon who fights with two sock-puppets that are also dogs. I was constantly looking forward to what strange people Helck and Vamirio would meet next.

As the story further develops, the hilarity and carefree nature of the tournament arc soon gives way to a mystery. While the demons were distracted with figuring out Helck‘s motives, it turns out that the human villages near the border have all mysteriously emptied. Not a soul appears to be left, the entire land abandoned. Soon after, the empire falls under attack from winged knights, whose sudden appearance changes the direction of the story drastically.

While Helck never loses touch with its comedic side, the second half of the story does succeed in introducing threats that also make Helck genuinely enjoyable as a serious action story about a fantasy war. The mystery of the winged knights, the fate of the villagers, and what exactly Helck did to end up hanging out with the demons are all intriguing storylines. And for the Berserk fans, there are also the “New World Organisms”, otherworldly horrors of ambiguous origin whose actions play a big role in the story towards the end.

All these mysteries build up good pacing and constantly throw in new revelations that make you want to plow through another 10 chapters to see what might happen next and how it will affect the cast of lovable characters.

It was popular enough in Japan and ranked 4th in a Shogakukan poll for which series should receive an anime adaptation, falling just behind Mob Psycho 100 and Kengan Ashura, which have received adaptations since. In the west, though, it seems Helck went largely ignored. No official translation exists and no publisher has taken it on. There is very little buzz surrounding the manga and less than 5000 people have Helck listed as completed between MAL and Anilist. A shame, because I think a lot of people would love it if they actually knew it exists at all.

Helck is no Berserk, and certainly doesn’t have art on the same tier as Kentaro Miura’s, but it’s actually bloody finished and has a compelling story told across 100-something chapters*. Helck is a story that has so much going for it and feels so complete. Combine that with its niché genre, and any fan of fantasy really does owe it to themselves to check it out. You are probably never going to get a story with the same qualities as Helck ever again.

*A note for sensitivity: This review was published prior to Kentaro Miura’s passing in May of 2021. I realize it may appear rude to use Berserk’s incomplete status as an argument for why Helck warrants attention, but this was never intended to make light of its author’s death.