Monday’s review of Genshiken was a fun article to work on. The quality of the show certainly contributed to that, but it also gave me a newfound appreciation for the people I share this hobby with. However, I also realized that I had been postponing a certain OVA that served as a similar commentary on otaku culture, which I decided to immediately remedy after I finished writing the review of Genshiken. 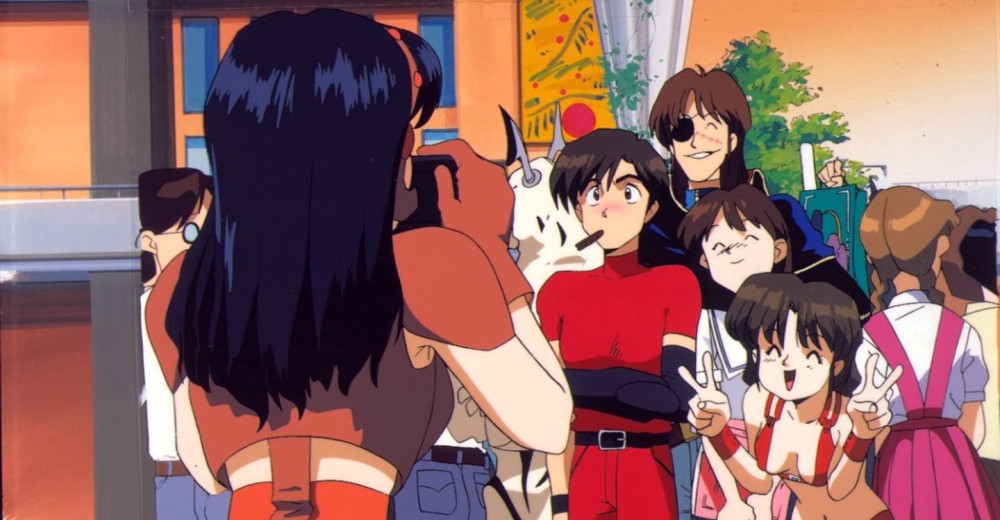 Otaku no Video is a 1991 OVA series of just two episodes directed by the now-celebrated Takeshi Mori and produced by Studio Gainax. The OVA is about a student called Ken Kubo, an everyday boy that doesn’t stand out much and mostly just plays tennis, hangs out with his girlfriend, and goes about his life. That changes when he is reunited with his old friend Tanaka, who has now dedicated himself to an otaku lifestyle that Ken is quickly dragged into as well when Tanaka and other friends force-feed him mecha anime and get him interested in every facet of Japanese nerddom.

Ken’s life is quickly turned upside down and he soon vows to conquer the world as the absolute ruler of all Otaku. The second episode covers his plans to do just that, as Ken dedicates himself to a business venture that will create big waves in the anime community, which is also where the OVA gets more than a little silly. Besides being a fun OVA, Otaku no Video also markets itself as a documentary and intersperses the animated segments with interviews between Gainax staff and various otaku, where topics about the hobby are addressed and we get some insight into how these people live.

While likely staged, it is these strange interviews that complete Otaku no Video and make it such a worthwhile thing to watch. In fact, this and Genshiken are two series that I would honestly recommend as must-watch material for every dedicated anime fan out there.

The reason being that both works allow you to immerse yourself in the zeitgeist of being who you are, had you lived in Japan in 1991 and 2002 respectively. Otaku no Video’s animated component shows a romanticized tale of an everyday Joe abandoning everything that mattered to him to pursue the otaku lifestyle, fueled by the kind of mecha anime and sexy characters that Gainax themselves were peddling in this era of animation.

As somebody who got into anime during the early days of online streaming and didn’t walk into an anime store or convention until I hit 20, it has been a privilege to watch the stories of Ken Kubo and Kanji Sasahara, and see how our lives are similar and where they differ. Nowadays we got legal online streaming, simulcasts, big western companies financing anime productions, and social media to unite us with fellow fans the world around. All of these are great benefits to us and they also allow us to watch Genshiken and Otaku no Video, both to be entertained and to remember a time where watching anime was a very different hobby.