Eikichi Onizuka used to be a legendary and feared street criminal. he’s tall with bleached hair, he has piercings and an impressive physique, not a guy you’d want to mess with. He also has an aggressive streak and short temper, but he is looking to change that.

The former gang member has set his sights on a teaching career and, at the start of the show, is just about to enter a 2-week internship. It may seem bizarre, but his blunt (and frequently illegal) teaching methods may prove to be more effective than anybody could have anticipated. Onizuka is an appealing character because of his unlikely vocation considering his background. He is rude, simple-minded, and more than a little dangerous, yet also brimming with ambition and he has a unique way of understanding people and helping them resolve their problems. Sometimes those solutions require violence, but that’s only illegal if somebody reports it.

Fitting for a former criminal, the classes Onizuka gets to teach are filled with “students” that aren’t exactly law-abiding either. Bullies and delinquents run rampant and none of them are taking kindly to the newest teacher.

The extra-long first episode already deals with Onizuka having to return discipline to a class filled with aggressive troublemakers. After his internship, however, he moves on to a different class where the trouble the students are causing isn’t as immediately apparent or easily resolved. They are determined to discredit Onizuka and get him fired by any means necessary, even if that means getting him charged with crimes or actively trying to murder him and other teachers.

Watching Onizuka foil all their plots and try to turn the students to his side is very interesting and satisfying. With 43 episodes, it’s also the longest and most elaborate anime about teaching I know about, which allows the show to really dig into this subject and develop gradually.

Major kudos to Great Teacher Onizuka and author Tooru Fujisawa for presenting a very serious and grim take on bullying. Several of Onizuka’s students are bullies themselves or the victims of it, which includes serious cases like sexual exploitation and blackmail. 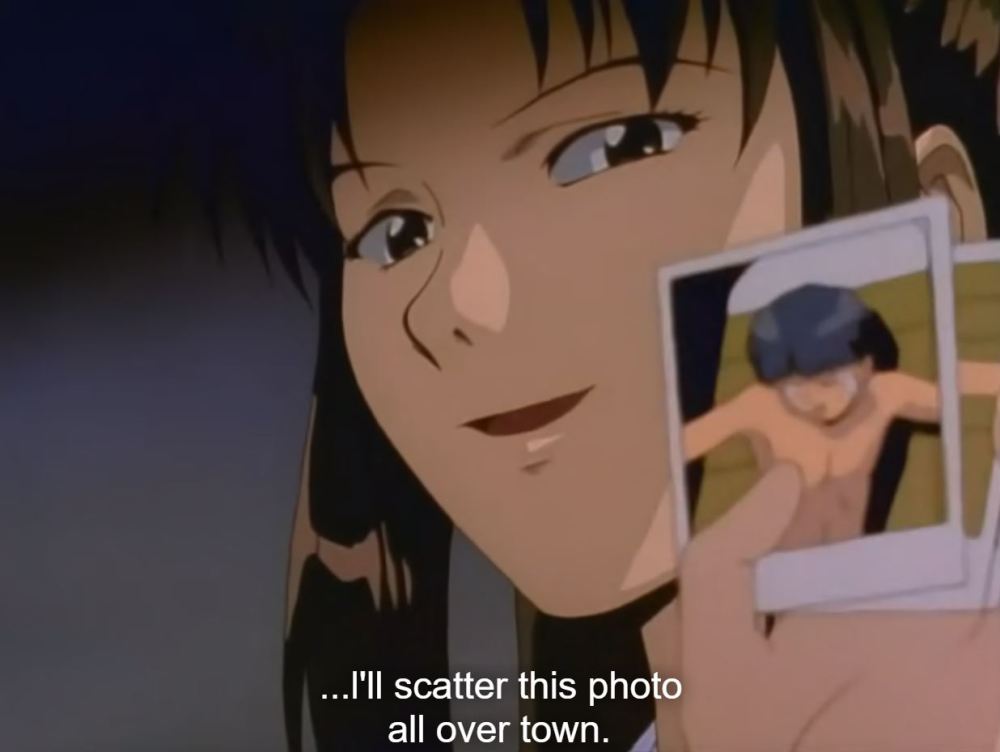 The consequences of these are also serious, with an early episode already going so far as to tackle teen suicide. While the show stays overall comedic, it may be a bit too confrontational for people who have faced similar struggles in their youth (or are still dealing with them). The bullying also extends to Onizuka himself. In an early episode he already has to deal with a mysterious person photoshopping his likeness into erotic pictures; he faces bullying from students and his colleagues, both trying to get him to quit or force him to do so by ruining his career.

Onizuka is 22-years-old and the show makes specific mention of the fact that he’s a virgin. Onizuka himself uses the allure of seducing high school students as one of the reasons for his career change, but when he ends up teaching at a middle school he instead sets his sights on fellow teachers and the parents. 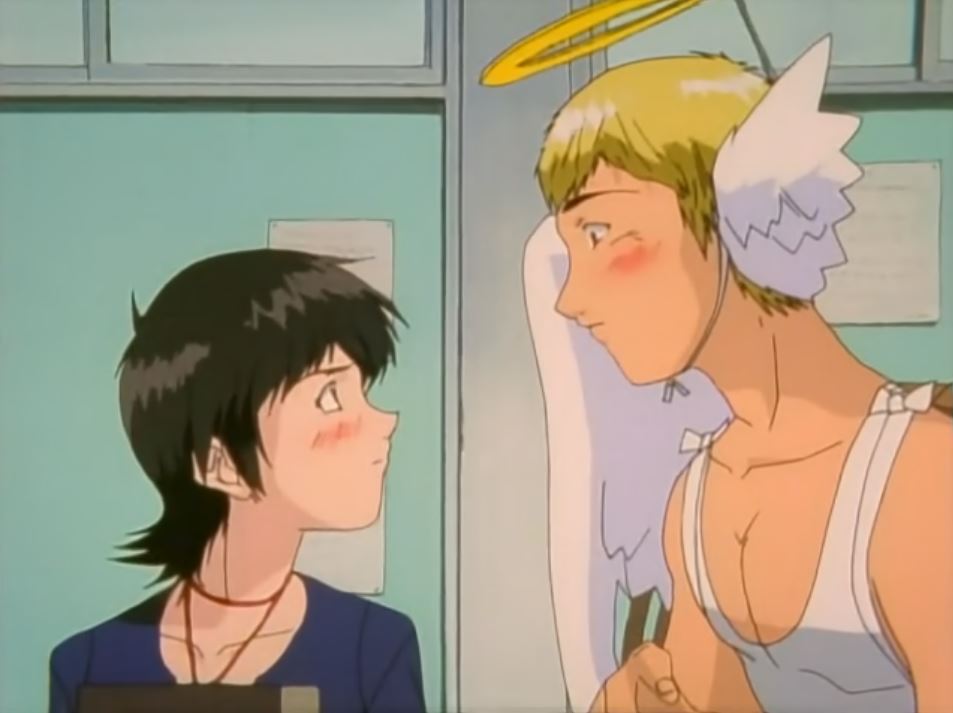 His perverted nature is often played for laughs, but the show likes to focus on two specific women that Onizuka shares a lot of time with. One is the mother of his student Murai, who gave birth at a young age and was abandoned by her parents and lover. Murai is, however, extremely defensive of his mother and goes to great lengths to keep her and Onizuka away from each other.

There is also fellow teacher Ms. Fuyutsuki who has her job interview at the same time as Onizuka and takes an immediate liking to him. The two have very different lives and personalities, but there is a chemistry between them that I found very appealing. Some episodes also explore Fuyutsuki’s own struggles in the classroom, which gives her and Onizuka a shared hardship. Honestly, I was glad they dropped the whole “seducing his students” idea in favor of developing more appropriate romances.

GTO is a comedy show and humor is always going to be subjective. Personally, I had a really good time with it and was impressed, in particular, with how well the show managed to age despite first airing in 1999. 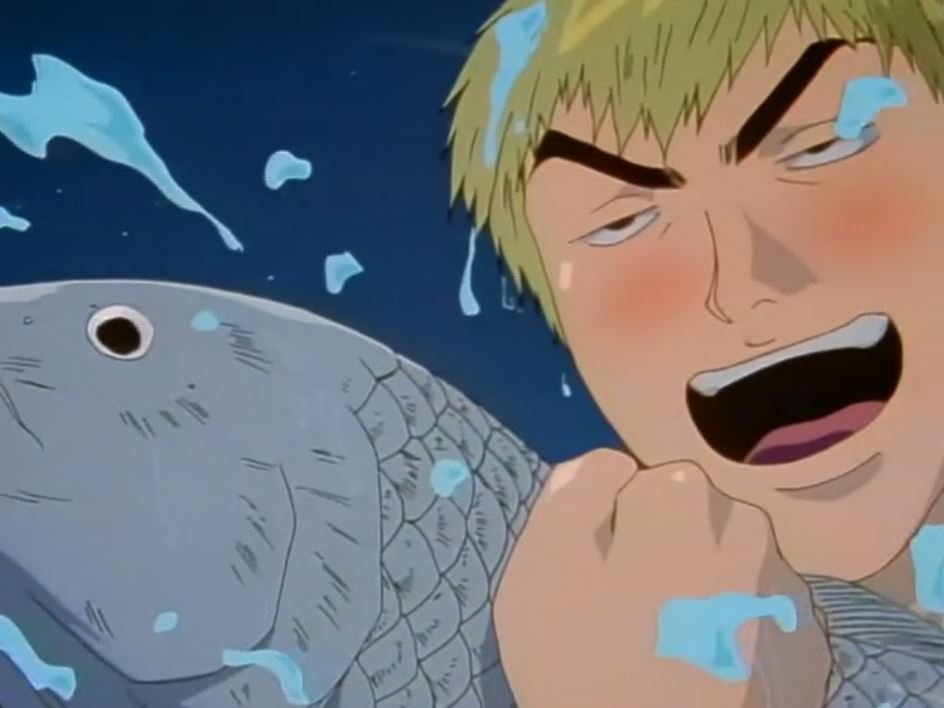 A lot of its appeal comes from Onizuka himself. He is a big, lovable goofball who often surprises the viewer and other characters with his bizarre actions. You rarely know what to expect from him and his interactions with troublemakers in the class are often hilarious. I want to praise the animation in particular, as Onizuka’s facial expressions are incredibly diverse and add a lot of hilarity to even the simplest jokes.

A lot of the humor is satirical or uses slapstick, but there are also a lot of scenes that have perverted jokes to them. There are also a few references spread throughout, but these are so mainstream that they are recognizable even today and actually ended up being surprisingly well done.