How Ancient Magus’ Bride caused me to stop buying manga

Let me just link put the link there myself. Yes, I know what I said. No, that hasn’t changed all of a sudden. I am still wary when it comes to purchasing ongoing manga series, but in the case of Komi Can’t Communicate, I was either going to buy the first volume now and figure out whether it was for me, or wait until the internet had spoiled every single one of its jokes.

Shouko Komi has been a consistent presence in many an anime community since her manga started making the rounds on the web. She has become an internet darling and I couldn’t help but get a little curious about what kind of story gave birth to such a phenomenon. After reading a range of different reviews, I decided to pick up a volume myself and just give it a try.

The story follows Hitohito Tadano, a young man who wasted away his middle school years trying to act cool and stand out, which he now looks back on with horrified embarrassment. He decided to turn this around upon entering high school by avoiding any and all attention. A plan that might have worked, if he wasn’t seated right next to Shouko Komi, a beautiful, elegant, and reserved girl that quickly earns the admiration of the entire school. Consequently, Tadano becomes the most hated guy in class, just because he was randomly assigned the chair next to her.

Komi makes an aloof first impression, perhaps a little intimidating even, but Tadano soon finds himself alone with her in a classroom and learns that she is just too shy to speak. She is anxious about everything related to having conversations, she fusses over every little detail and finds herself paralyzed by the many questions she can’t answer. Tadano manages to befriend her and vows to help Komi make 99 other friends, no matter what it takes.

What gripped me early on is Tomihito Oda’s remarkable flair with visual storytelling. An early two-page spread puts Komi in the middle of dozens of classmates walking away from her, with the manga’s title being adapted to each of them to summarize their personalities. An even better scene comes later, when Tadano and Komi become friends by filling up a blackboard with mini-conversation and doodles, in place of actual talking. 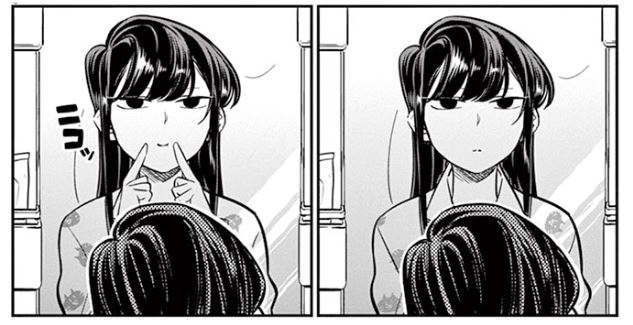 Komi Can’t Communicate is definitely a comedy manga and gets a lot of mileage out of its adorable protagonist, but scenes like this forge an emotional connection and left me rooting for her. There’s a lot of good comedy manga out there, but not as many with stories that are genuinely heartwarming.

It’s not all sunshine and roses though. While the first volume had some excellent moments, it also had entire chapters that just felt like filler. Chapter 15 is just the most basic gag they could do with Komi’s characters, as she wanders around the street with everyone admiring her, while from Komi’s point-of-view it feels like a hundred judging eyes glaring at her. Chapter 19 was also a poor one to close out volume 1 with, as it has a bunch of classmates get together and play these weird games I couldn’t wrap my head around. Is this what high schoolers in Japan do for fun nowadays?

I am also not very overly fond of the side-characters that make up the cast of classmates. The manga makes a point of explaining that Tadano and Komi’s school is filled with various weirdos, which leads to some strange jokes. Najimi Osana is introduced as a pathological liar of undeterminable gender, but after two jokes about his/her gender, this whole aspect of Osana’s character is dropped in favor of focusing on her ability to befriend almost anybody and maintain countless friendships with ease. Similarly, Himiko Agari is introduced as a girl that can’t deal with social interaction either, but instead of befriending Komi she settles on becoming her loyal dog.

I am going to pick up volume 2 of the series. While I hope to see improvements in the cast of side-characters and I’d like the suggestive content to be dialed down a notch, I am invested enough in Komi’s story to want to see at least a little more. Oda’s creative direction and knack for visual gags elevates the manga beyond the average comedy series, and I am also curious to see what role Tadano will be playing in future chapters.