The use of CGI in anime remains a difficult subject matter that people tend to feel strongly about. Some feel that it’s a great way to make animation cheaper and more efficiently with little trade-off, while others think it looks passionless and cheap. The Magnificent KOTOBUKI goes all-in on CGI and shuns traditional animation almost entirely, making it a tad awkward that it looks worse than even the older seasons of RWBY.

Being an anime about aerial dogfighting, CGI does work well for the actual combat scenes, but everything else is a disaster. Characters look lifeless and animate like poorly-handled puppets. Their expressions are constantly off and anything other than sitting & talking ends up looking goofy. There was never a moment outside the cockpits where I felt that being full CGI was beneficial to the anime, outside of the fact that it likely wouldn’t otherwise exist.

I do have some respect for the show and do hope that CGI continues to improve, but perhaps the lads behind the Berserk remake weren’t the most ideal picks to be pushing this particular agenda.

I am often drawn to shows that play with militaristic themes. My love for the Girls und Panzer franchise is a good example of such, but I found that KOTOBUKI was unable to scratch this particular itch of mine, despite appearing so similar to GuP.

What bothers me is that the cast of characters that make up the KOTOBUKI team are all very young, yet improbably skilled teenage girls. The anime starts off with a team of pilots playing card games and boasting about their skills, only for the little girls to shut them up by bringing up their 200+ confirmed kills. The actual pilots then get shot down with ease by the episode 1 baddies, who are then completely trounced by the actual main characters, who only suffer some mild damage. In episode 2, they double down on this by having the smallest of the kids taking on grown men in an actual fistfight and beating them despite being wounded.

I know it’s an anime tradition to empower young characters, but it’s so overdone here that I lost interest. Not only are these girls decorated war veterans at the estimated age of 15, they are also just not that fun. Their personalities are underdeveloped and main characters like the immature Kyrie and Chika, or even the robotic Kate, are just annoying.

I admit to not having much experience with anime about aviation outside of the big Ghibli movies, Cluster Edge, and arguably Simoun. It’s a genre I still intend to dive into, even if KOTOBUKI did nothing to advertise it.

The battles just aren’t that interesting, with especially the first 3 episodes playing out exactly the same. Some allied force for the girls is briefly introduced and characterized, only to get completely wiped out. KOTOBUKI then arrives and devastates the enemy forces, safe for one token threat that gives them some brief trouble. It does get more creative over time and some later episodes make good use of CGI to create very busy battles with hundreds of planes in it, but it doesn’t provide much to entice viewers to stick around for that long.

It lacks the impact of tank combat in Girls und Panzer. Dinky little machine guns taking out identical aircraft just doesn’t have the punch of tank shells tearing apart the enemy forces. It also just feels too tame. There are no pilots getting shredded by bullets or satisfying explosions; every plane just gracefully plummets from the air like it’s trying to quietly bail from this anime. The low point of the series comes during a boarding action where man-on-man combat ensues, but everybody just happens to have rubber bullets and blunt objects, again denying the show some much-needed edge.

As of late, I have gained a newfound anime pet peeve in the form of stories that don’t properly introduce their setting and backstory. KOTOBUKI makes zero effort to pull you into its world, it doesn’t tell you where it takes place, when it takes place, what kind of world these characters live in, or even who those characters are and where they came from. 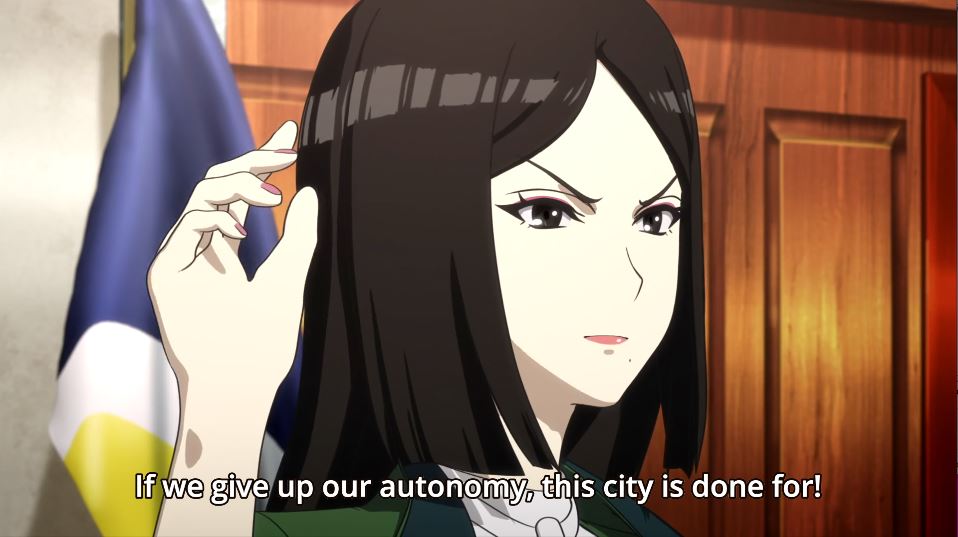 It takes until like episode 5 until the show finally confirms that it’s a post-apocalyptic setting and then it takes until episode 10 for the show to explain how it’s also a supernatural show. These aren’t well-kept secrets or big plot-twists, every character in the story knows about it and it’s just fundamental knowledge about the world that you require to understand the story.

I would be okay with a show not being too uptight about its world-building, if only KOTOBUKI didn’t draw so much attention to it. There is this one recurring character who is a radical politician and she keeps getting angry about all these problems and causes that the audience never sees anything of or receives an explanation on. The anime expects you to be invested in its politics and root for this woman trying to push for reform, but it doesn’t provide you the means to grow an understanding of this world’s political structure or the problems its people are dealing with.