#1 A different kind of isekai

In her previous life, Tanya Degurechaff was a Japanese businessman feared and hated by all who worked with him. His ruthless pursuit of results and complete lack of compassion eventually led to a recently-fired employee pushing him in front of an oncoming train. 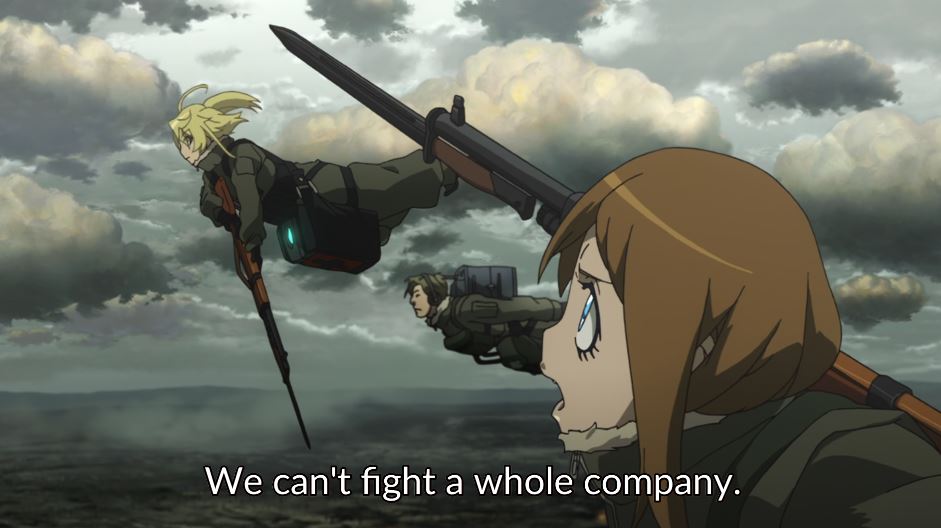 As punishment for living such a privileged and selfish life, this unnamed man is reincarnated as a little German girl in an alternate history version of our world. It’s the early 20th century and the country, referred to as “The Empire”, is wrecked by poverty and hardship. Tanya grows up in an nunnery struggling to get by, until the country is plunged into war with its neighbors and Tanya enlists.

The setting is very different for the isekai genre, which typically focuses on more fantastical settings. This time it’s just good, old Europe with country names changed around a bit. That may sound lame, but the timeline and state of the world are also different and that leads to some interesting alternate history stuff. World War I never took place, for example, so on the outset of the war, there aren’t established alliances yet. And, instead of lovely tanks, the big innovation of this world that revolutionizes warfare is magic, which leads to infantry flying around and launching artillery spells on the trenches.

It has enough familiar elements to make it easy to understand the context of the story by comparing it to real-world parallels, while also offering enough variation to still surprise the viewer.

The Empire, this anime’s stand-in for fascist Germany, is a meritocracy through and through. It doesn’t matter if you’re man or a woman, rich or poor, anybody can rise through the ranks by proving themselves. Yes, even if you are 10-years-old and the standard issue rifle is bigger than you are. 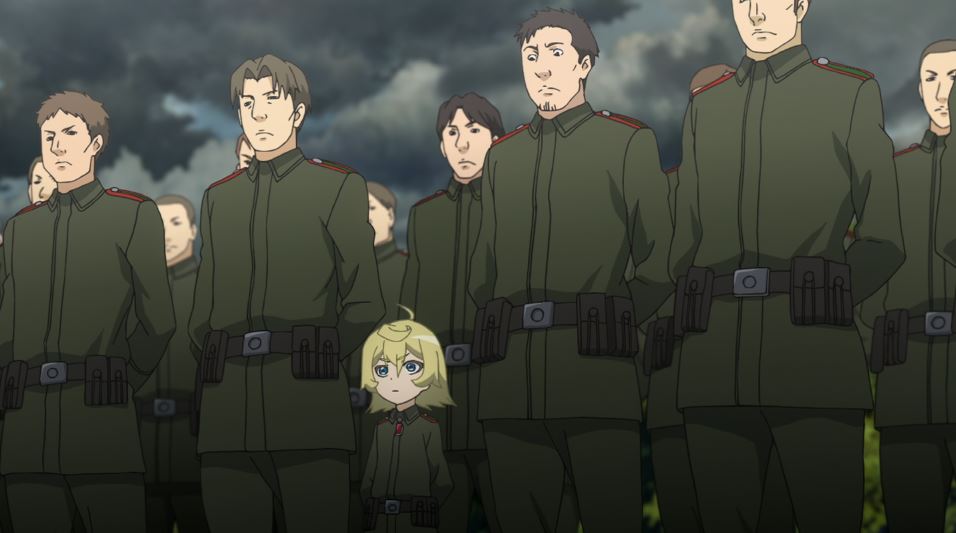 Tanya is blatantly a little girl, even if she has memories of her past life. She is small, cute-looking, and speaks with a lisp that makes it difficult to take her seriously, but she is still just as ruthless and now no longer chained by social expectations or needs to respect human life. War brings out her very worst, making for a shocking contrast and a captivating main character.

You got this little girl in a military uniform flying around battlefields, butchering enemy armies and leading her country to glory. She commands both fear and respect as a commander; she puts her soldiers through hell by way of training and deals harshly with those who disobey her, but also knows how to reward loyalty and competence. However, even those who respect and follow her know all too well that Tanya isn’t exactly mentally stable.

Just as her previous life was about to end, Tanya found herself in a conversation with God. Disapproving of her selfish life and fervent atheism, God made one last-ditch effort to let Tanya repent, before deciding that reincarnation into war and poverty would teach her to be a little more devout. “There is never an atheist in a fox hole” I suppose, but who needs fox holes when you can fly around with your magic sniper rifle. 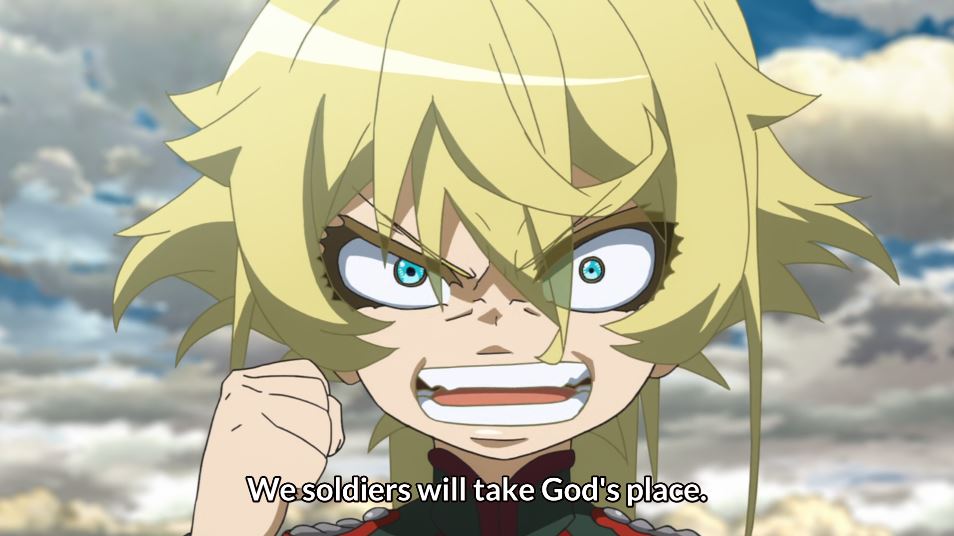 Tanya is determined to live long and prosperous by the same ideals she held in her previous life. God, or “Being X” as Tanya mockingly calls him, is not above a little pettiness himself, and frequently intervenes with Tanya’s plans for a leisurely life by manipulating events and people to work against her interests. Neither of the two is willing to meet the other halfway, so it’s a wager to see who gives in first. Will Tanya embrace religion when her life is at stake or will God realize that plunging a world into ever-greater war just to coerce one girl is probably not worth the hassle?

A little girl fighting for a country that is an obvious stand-in for fascist Germany while trying to disprove God sounds a little sketchy, doesn’t it? I heard the show summarized as “Nazi Loli with magic” and just kind of ignored it because of that, until a friend of mine reassured me I was missing out something genuinely good. 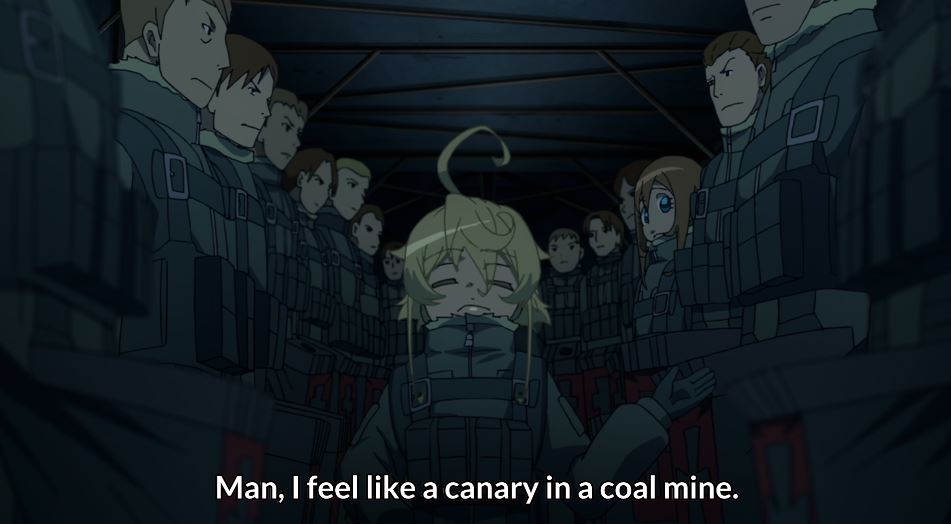 While the individual elements sound edgy, Saga of Tanya the Evil is actually not that bad despite touching on some controversial subjects. The Empire is based on Nazi Germany, but it isn’t the same and certainly not in ideology. The war is a product of political unrest and international relations and features none of the systemic racism or, you know, genocide that characterized its real-world counterpart.

The war is also a generally honorable one, whereas you would suspect it to be full of war crimes and the like. Tanya, as her epithet suggests, is definitely on the cruel and vicious side, but not to a pointless degree. She doesn’t even really want to be on the battlefield, instead making it her overall objective to land some cozy desk job far away from the fighting where she can grow old without risk.

Saga of Tanya the Evil does warfare very well. I got a lot of mileage out of my fancy new headset as battles in this anime go accompanied with delicious explosions and loud gunfire. Juicy sound-effects with the right volume and reverberation to it. 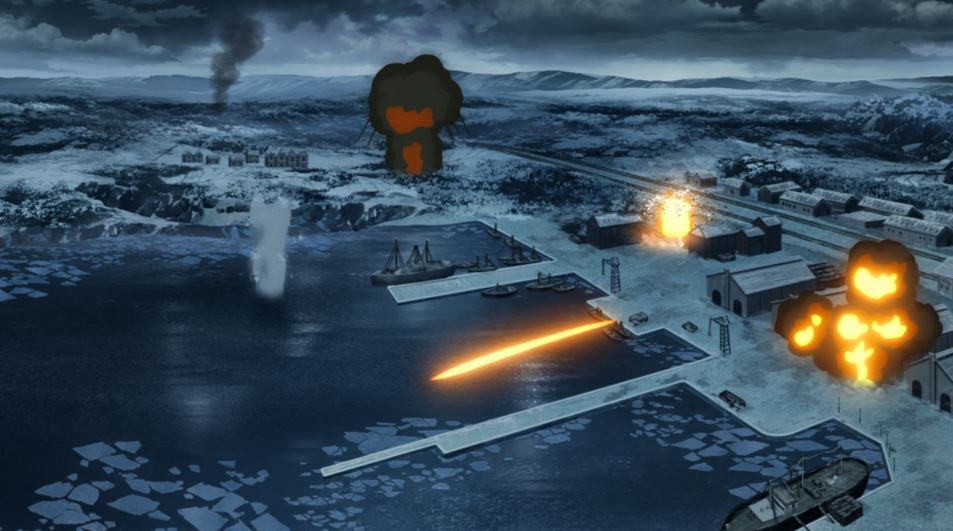 Casting Aoi Yuuki as Tanya was also spot-on. She lends a wonderful and instantly-recognizable tone to the character, perfectly capturing both her intellectual side, as well as her deranged speeches and unhinged screaming in battle. Yuuki also sings the show’s phenomenal ending song Los! Los! Los!, making this one of the rare few shows where I skipped the opening every time, but stuck around for the ED.