#1 A world of hero and villains

In the world of My Hero Academia, having a superpower has become increasingly common as per the last few generations. From super strength to breathing fire and from turning into a giant to possessing psychic abilities, there is no limit to the kind of powers people can have. 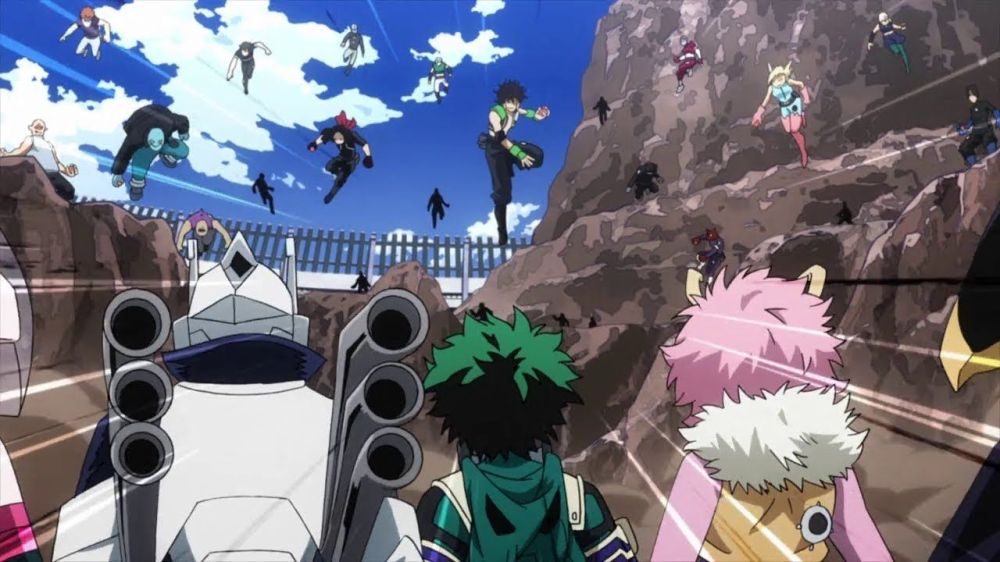 While this gave rise to professional superheroes backing up traditional law enforcement, it has also turned the common criminal into a potential supervillain. The guy robbing the bank might start spraying corrosive acid around or you may find yourself being assaulted by a bizarre slime monster in the alleys. Initially, My Hero Academia is very much about this plastic-y dynamic of marketable superheroes defending the people from these bad guys, but the story soon changes direction and starts to really delve into the darker implications of what a world like this might be like.

What if somebody is randomly born with dangerous or frightening powers they can’t control or cope with? What if people start doing inhumane experiments to meddle with people’s powers to see if they can be enhanced or transferred? What if “heroes” start selectively breeding to create superior kids? My Hero Academia addresses all of these and more, creating exciting storylines with many moral conundrums and philosophical questions. And, of course, it still features superheroes beating up bad guys alongside that.

#2 Deku as the emotional core of the story

Izuku “Deku” Midoriya is a hero fanboy, tragically born without any kind of power of his own. He is an analytical and intelligent boy who keeps a detailed record of every superhero he knows, but despite his tenacity, his dreams of becoming a hero himself are utterly doomed. That is, until he meets his idol All Might, the most famous hero ever, who reveals that his particular power is transferable and he wants Midoriya to be the next heir.

He is the poster child for the underdog shounen protagonist, a weak boy bullied for his otherness, but who finds the strength to change his life and rise to the top. He is not a complicated character; just a smart boy who is driven, selfless, and lives to attain a perfect ideal of heroism. However, he is endlessly lovable and it’s easy to get swooped up in his emotional nature.

Fans joke about Midoriya crying over everything, but when it matters, you really want to cry along with him. He is constantly pushing himself further and reaching new heights, constantly facing new challenges, and the show keeps finding ways to keep his story captivating.

Season 4 has been the most devastating yet, as it puts Midoriya in a situation where he had no choice but to give up on rescuing a little girl imprisoned against her will. This failure wrecks him with guilt, while also driving him to put everything on the line to organize a second attempt. A second attempt that pits him against one of the most formidable forces of the criminal underworld and which will surely claim lives on both ends of the conflict.

For me, My Hero Academia captures exactly the kind of excitement that I look for in shounen anime. Produced by the Studio Bones, known for other top-tier shounen adaptations like Fullmetal Alchemist and Soul Eater, and with a soundtrack provided by Yuki Hayashi (Haikyuu, Death Parade, Welcome to the Ballroom), it’s no surprise that the show has been so consistently great since even its first season.

The action is a always a blast, whether it’s the friendliest of sparring matches or a battle to the death. Each superpower is so unique and fleshed out that it makes each new hero or villain interesting, with very few becoming throwaway encounters. There is a lot of strategy that goes into even the little fights, but it finds the right balance between being smart and keeping things exciting and active.

Speaking of Uraraka, My Hero Academia comes with an enormous cast of characters, with new ones constantly phasing in and out of the plot. No matter how brief their screentime, each relevant character has a good hook to them and Kouhei Horikoshi is just as skilled at character design as he is at writing them.

It’s no wonder that Hero Academia characters are so often listed as favorites by people, because there are characters in there for everyone. Traditional superheroes straight from western comics, cute anime girls, comedy side-kicks, interesting LGBT characters, characters that look like traditional shounen heroes, it’s a very diverse mix and I constantly looked forward to episodes that would take some of these characters and give them the spotlight.

All Might is this dying superhero desperately clinging to his depleting power because the world still needs him, honor roll student Tenya Iida distances himself from his friends and becomes consumed by a desire for vengeance against a villain, and Asui… is a frog. Frogs are pretty cool, ain’t they?

Even the villains get a fair treatment and were often the most interesting characters in any arc. I was especially fond off Mustard, this edgy teen in a gas mask whose superpower is generating a toxic gas. He is ominous and potentially quite powerful, but he’s such a whiny little shit that’s so full of himself that it completely handicaps him. I don’t even think his own allies liked him.

This point remains basically unchanged from my original review. My Hero Academia is some of the finest dubbing we have seen in anime thus far; it’s on par, if not better, than the Japanese audio track, and to see such quality in such an accessible, popular show makes me so very happy.

It makes me think back to the big shows I watched when I first got into anime and how their dubbing work could be less-than-ideal or even just non-existent. I am thrilled that new anime fans might get their first or second taste of anime from a show that has such a comparatively amazing dub, on top of already being a great show.

The Japanese audio track is great in its own right, but it just sounds wrong to hear some of these characters with a different voice. Especially All Might is such an obvious play on American comic book heroes that his bombastic voice only makes sense in English for me.

Schools are a ubiquitous part of anime, but students rarely find the time to raid Yakuza hide-outs and battle with city-destroying monsters between attending classes. In an action-heavy show like this, you always risk the school theme going entirely forgotten, such as in my favorite punching bag Ataraxia, or a sizable chunk of the show just goes to boring school stuff nobody enjoys, see Blood-C for an example of that.

Hero Academia is mostly about Midoriya attending a prestigious school for heroes-in-training and it does a great job at making that fun, so even the downtime between hero stuff is entertaining. Classes are a great way to get a little world-building in, P.E. just becomes an excuse to show off the superpowers, and the ever-familiar school festival is turned into an exciting tournament arc.

Even some of the biggest battles of the show are cleverly tied to Midoriya’s studies. The big arc with the Hero Killer happens during their internship and the exciting season 1 finale happens as the school itself is attacked by an army of bad guys.